You are here: Home / Uncategorized / Photo Friday: Miracles Do Happen

Not only did the government not shut down.  Not only did we find a hotel near Yosemite for under 110 dollars.  Not only did that hotel have a kitchenette.  Not only did we make it all the way there without actually incinerating from all the stress… but all THREE of my children looked at the camera and smiled for two, count them TWO photos at TWO different times.

People, it is most likely the second coming/Apocalypse/end of times.  Please, don’t say I didn’t prepare you because things like this are like the four horsemen.  Or is it 8.  Anyway… be warned.

And now, for your viewing pleasure — photo Friday.

I took 200 photos while we were in Yosemite.  You can feel lucky that I am not going to show them all here today.  Like tithing, I have narrowed it 10%. 🙂

First off, this is the “tunnel view”… it made me feel so small and insignificant, and yet amazed that Heavenly Father created all of this just to enjoy.  And enjoy I did.  Did I mention 200 pictures.  Um, yeah. 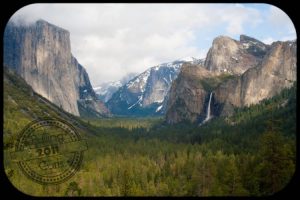 So, I really wanted to hike, hike, hike, while we were there.  I looked at the little guide to day hikes and I found one that was like 2 miles and sure, it said “strenuous”, but both Drew and I workout… right?  As we’re gasping and clawing at the asphalt and screaming for our kids to stay back with us in case we die, so they can record our last words we thought maybe we weren’t quite up to strenuous.  I almost kissed the ranger whole told us the hike was closed 1/2 way… we only saw the bottom of the falls, not the top.  What a shame.  But, here we are.  P is the one on Drew’s back with the hat on.  She wasn’t amused by the stranger taking our photo.  In other news, my face is a lot skinnier and hence has more wrinkles.  People, fatten up. 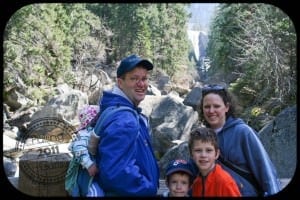 Spencer was Mr. “MOM, TAKE MY PICTURE” on this trip.  And while it’s fairly hard to believe, I obliged.  Can you believe how big the rocks are in Yosemite?  They’re pretty cool, and tiny Spencer showcases that nicely. 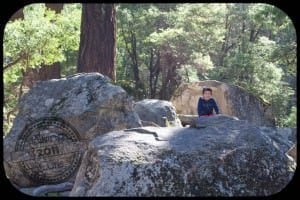 And here is little Miss Priss.  During the hike to hellish I mean, Vernal Falls she had a complete flip out, so we let her out to walk down the mountain.  She then found that that rocks lining the walkway were great for sitting.  Each. and. every. one.  BUT, isn’t she adorable?  I love this girl.  Look at her little dainty hands on her knees.  Cutest thing ever. 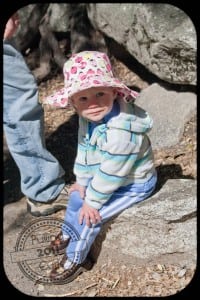 And El Presidente apparently thought he was Nixon for the day.  Wait, the lying… the gates of water… I’m seeing parallels here.  Anyway, here he is. 🙂 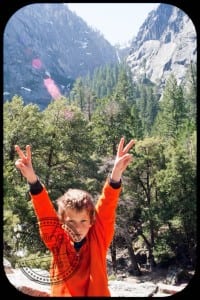 And, for the first of the two photos.  Isn’t it adorable?  Now, forget it, the likelihood of this being on my Christmas card is high.  Doubtful I’ll be making amazing costumes this messed up year. 🙂 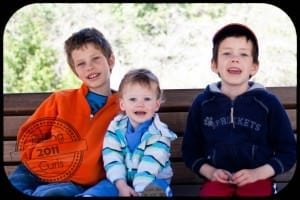 Here we are in front of Yosemite falls (upper is way at the top, and lower is further below). 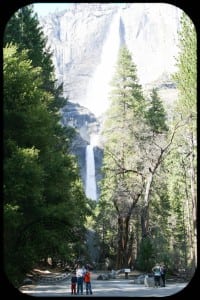 FYI, there was snow in Yosemite.  It. is. amazing.  Just ask my boys. 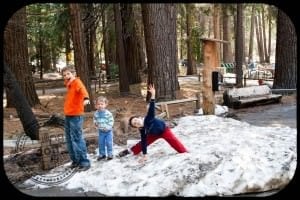 And the second of the every one’s looking at the camera shots.  Our third day in the park was totally overcast.  Not so great to see El Capitan, great for taking pictures of your children.  Win-win. 🙂 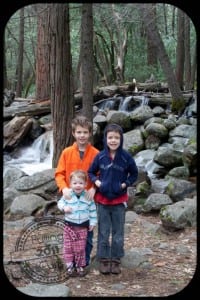 Conner even got me and Drew.  People, I think I may have cancer… that weight is just peeling off {snort} 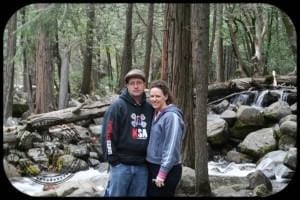 We ate at the AMAZING Ahwanee dining room.  Holy how was that place amazing!  And delicious.  Which was good after a few days of eating less than stellar food (ala, our cooktop in the kitchenette). 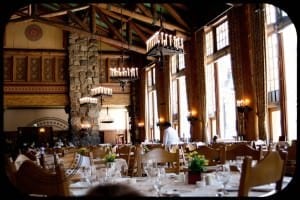 We had lots of talks about what a fancy restaurant it was and how we needed to use our manners….
Drew and Conner each seemed to act somewhat mature…. Conner even figured out how to hold a water glass appropriately… 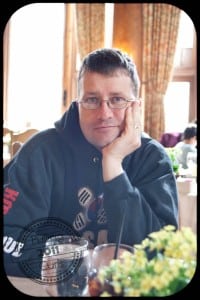 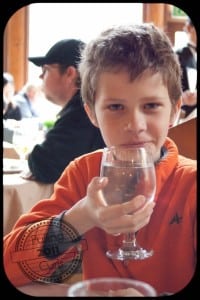 And, some people were perhaps a little less mature….. 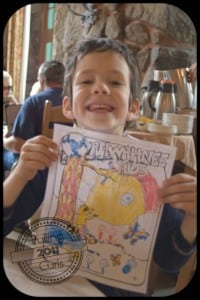 P dived into Drew’s coulee (it was like a thinned out jelly) for his sandwich.  This was after making her first course ranch dressing. 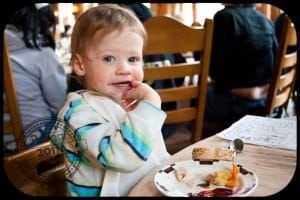 And I was just happy not to be having hot tamales for dinner.  I got a delicious pork chop with some polenta.  Yum. yum. 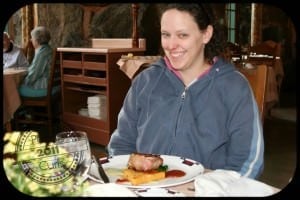 And finally, check out our view while we at such a divine meal.  It’s Yosemite falls.  No better spot in the world to eat, I must say. 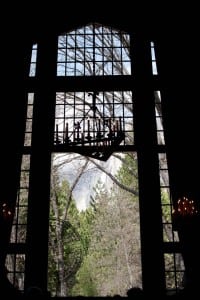 During that meal, what should appear, but a few flakes of snow… followed by sun, and then some snow, and then some sun, and then MORE snow.  And apparently it turned my kids insane.  They were SO excited to be out in a “snowstorm”.  P was literally a blur in all of these photos.  Poor Californian kids.  I will admit it made the meal pretty magical to look outside and see flurries. 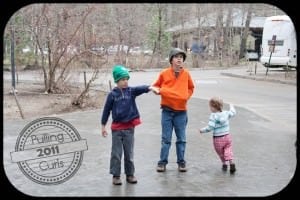 So, this is one other of my favorite water fall shots.  We were lucky to be able to go in the spring as the water was at a peak.   The falls were all amazing, and lots of other tiny falls were creeping up all over the place too.  We felt very blessed and inspired to take this trip when we did. 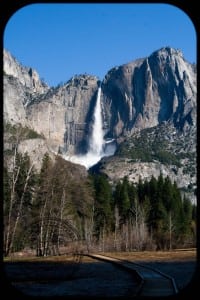 This is the last shot we took on our way out yesterday.  I literally can see a smile in it, like God is saying, every thing’s going to be fine…. and it will. 🙂 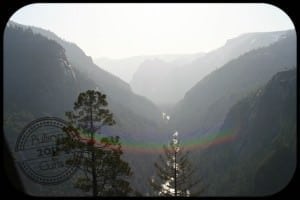