You are here: Home / Uncategorized / Where oh WHERE has the TIME GONE 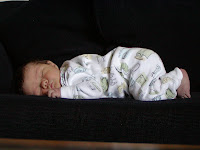 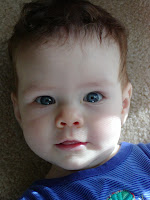 Honestly, I should give my own mother a present every year on my birthday.

I can’t believe he’s three. The normal second child sydrome has most definately occured here. I know as moms we all step back every now and then and go “what the heck?”. It all happens, whether we want it to or not.

So, I put my little baby to bed last night, his last night as a 2 year old and now he’s reached the official big boy mark of 3.

Spencer is SO excited to be able to play on the computer. I have an unofficial (yet, apparently quite official) rule that there’s no computer games til’ the kids are 3. Spencer is totally aware of this rule, and he’s getting a lovely computer game set from Costco for his birthday. I’m fairly sure he’s gonna flip his lid.

Spencer is starting to sound-out sounds. I know, none of you are going to believe me, and it’s a slow process… anyway, to me he’s a genius. :Spencer loves to play. He loves to have friends over and talk their little ears off. He’s a big talker lately. He finds things funny, he likes to imitate things. That’s right, he’s 3.

He still sucks his thumb… over the body of his mother. We’re trying… I get more and more worried about his little hard pallatte every day.

Spencer loves his TV time. I try and limit it to an hour on weekdays, but that doesn’t keep him from acting out scenes from Jo Jo’s circus, or Playhouse Disney.

Spencer is a big fan of me. He still wants to be held, kissed, hugged. He’s a big fan of Drew too, but I do have to take a little pride in the fact that I’m a definite favorite.

Spencer, it’s true I’m not exactly sure where our time has gone, but I know that you are the sweetest thing in my life. You’re my little buddy, you make me laugh, you make me cry… and if you’d just go to bed easier… well, I’m sure you all understand that part (and yes, I am fairly sure he has the same shirt in his 2 year old picture as he has in his 3 year old picture… we’re not expecting large changes at his 3 year old check-up on Monday).