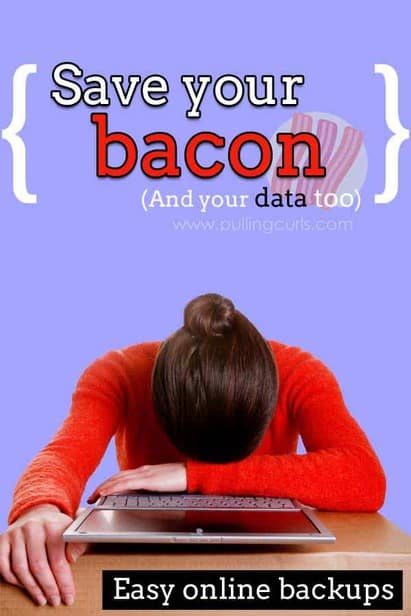 Let’s take a trip in my time machine to about 1996.  I had a giant nursing research paper due.  It was about how how mothers effect anorexia in their daughters, if you must know.  Suddenly, me and my 3.5 inch hard disk weren’t seeing eye to eye anymore.  Whenever we hit page 13 (of like 27) it froze.  I tried another computer, even went up to my dad’s office.  Page  13.  Freeze.  Over and over.

My dad worked as a dean at the college I went to.  He even called in his top tier tech guys, who just told me it was gone.

He looked at me and said, “surely you have a backup” — {sad face}

I had a printed copy that I’d printed about a week or so ago…. I had a lot of re-typing and re-editing in my future.

But, the reality is that it could have been a lot worse.

I have a confession that I still think Satan lives at the BYU Computer lab.  Or, he used to.  But, with the dawn of the internet things have changed. I love electronics, the freedom and the paper-less life it allows us to lead.

But it also allows us very little backup.

I have an external hard drive that does a full backup of my stuff every week.  It’s nice and small, easy to set up and has tons of space on it.  I would recommend something with at least one TB of data (that’s 1,000 GB).  Ours is very similar to this one.  I’d get a 2TB one if I had it in the budget.  Again it has software that just has it go every week (or however often you want it).  If you had to do a hard drive wipe, you could have it restore it to your computer and have it just the way you left it.  Super handy.

But, I worry about it breaking, or our home having an issue that kills it.

I’ve spent the last few years backing up some photos on Amazon Photos (free with your Amazon Prime — get a free 30 day trial here), using One Drive to back-up all of my documents.  It was all piecemeal.  But, one day I looked at the life that I am leading and how much I would miss the pictures and documents if they were gone.  I realized I would pay a lot to have those things backed up for me.

After an extensive search of the internet, especially after reading PC Magazine reviews I went with iDrive.

It was not until after I started using it, that I contacted the company to see if I could share it with other’s.

Think about it.  Those baby pictures (if you’re pregnant, now’s a great time to start, so you’re never left without them), your financial records, important papers.  It’s all on your hard drive.

But I wanted something off site, and after a lot of research I settled on idrive.  Things that were important to me: **A lot of people worry about the bandwidth that this type of backup takes from your computer, but I’ve found it to be quick and painless.  No big changes with internet speed because I have it set to go in the middle of the night.  It actually backed up pretty quickly on my high speed internet, especially considering how many photos I have.

Anyway, that’s why I went with idrive.  You won’t believe the price for the first year.  Through my special link it’s 75% off — only $14.88 for a full year!  It does increase after the first year, but once I have it set up and going I’m willing to pay the 5 bucks/month to just know it’s there.  That price is really comparable to what other places charge, it looks like.

I actually went with idrive on my own before them giving me this special link (I liked the service so much I emailed them to see how I could share it with you).  It’s something I spend my own money on and I think it will save you stress.

So, check into it and grab yourself some peace of mind!