Sign up now!
You are here: Home / Uncategorized / Traveling and the Golden Spike
Yes, a one month trip by car did not sound so appealing, I must admit. As a re-cap for those of you who might not remember my situation, I have 2 boys — ages 4 and 7 (he turned 8 on our trip), and I have made a personal goal not to have a car DVD player because I want my children to look out the window every now and then, instead of whining at me to put in a movie. I made these ticket books which I must admit were a HUGE hit. I highly recommend them. It took a fair amount of time to figure out what city we would be in when they would hit the ticket — but that was also a big help, and it had them open their eyes to read signs, etc. We had a few other items that really helped:

Major issues that we had with our road trip:

Let’s say that I didn’t particularly roll with the punches on these items {gasp}. If there was one thing I’d fix about myself is being able to not stress about these little items. I didn’t do well with the cracked windshield, but I did surprsingly well with the ticket (does anyone know if you can do traffic school for a ticket you got in NV if you live in CA?). I didn’t budget for issues like this on our trip, and I should have. No, we won’t go into financial ruin, but I wish I would’ve thought about them before hand. As for the rest of the budget, I think we spend just around 600 dollars total on gas (some of the gas in Yellowstone was split between us and my parents — so if you re-did the trip it’d probably be closer to 650-700). That was obviously cheaper than it would’ve been to fly (regardless of how many people I had tell me it wouldn’t be). I kept to our 50 dollars when staying in a hotel budget, and 20-25 when we weren’t. We stayed completely under that and it actually stayed fairly near our normal budget we have at home. 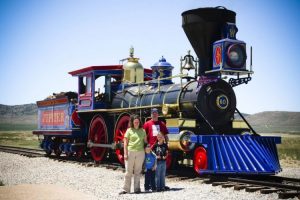 Now to the more exciting part. On day one we traveled from home to Elko. I would like to thank whoever thought-up Dairy Queen, as they truly are a queen in my mind. Let’s just say there’s not much to bring joy to a gal in Elko — but the DQ is one of those things (complete with fry sauce). On day two we were going from Elko to Drew’s home town of Mink Creek, ID (which is just outside of Preston). Drew had the inspiration that the Golden Spike state park was somewhere near there, and so we took a detour to that. Let’s just say that it’s not near anything you’d normally go to — so if you want to go, you’ll be going at least an hour out of your way. However, it was pretty interesting. We happened to get there at noon when they run the trains. They’re much different than the trains we ride and the kids found it pretty interesting. It also made them realize what life was like before trains. They had some wagons and handcarts set-up there and the kids quickly proclaimed they’d prefer to go on the train than with one of those. I’d agree. We did find out that after traveling 700 miles to see that monument that the actual Golden Spike is at Stanford University — less than 30 minutes from our house. Go figure.

On the way to the golden spike, you can also see some of the action that happens at Morten Thiakol (I think they changed the name — but either way, they’re the people who make missiles and the rocket boosters for the space shuttle). They have a little museum of their wares for you to peruse. 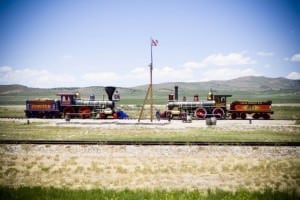 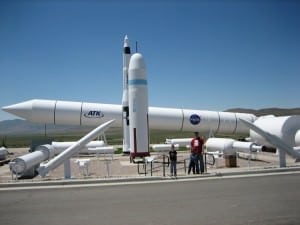 Finding little places to go is what makes road trips fun. I’m glad we took this little off-shoot from our regularly scheduled programming.