You are here: Home / Parenting & Family / Why I Stopped Swearing 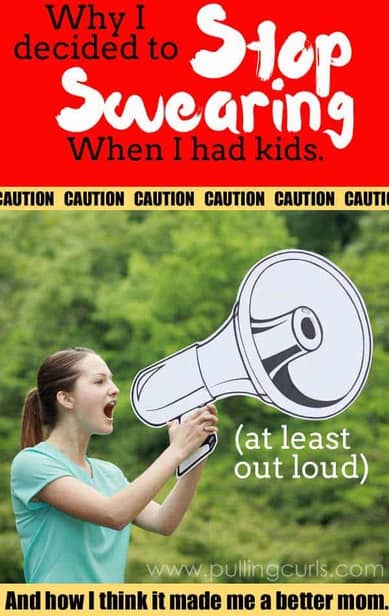 I used to work in a nursing home.  While it was a very worthwhile job and completely necessary.  I, hopefully, am not the first to tell you that a nursing home isn’t often staffed with the classiest of humans.  I wish they were.  Our geriatric population deserves better, but the low wages and tough work makes it less attractive to some people. And I grew a sailor mouth there.  There was a &[email protected]( and a &@^! every now and then.  My mother was totally appalled.

I am not sure I’ve ever heard her utter a swear word other than the time she ran over our neighbors cat (which, frankly, was probably well-deserved).

After a couple of years there, it was just commonplace in my vocabulary.  I never felt totally comfortable using them, but I did.

And yes, if they all jumped off a bridge I totally would have too. 🙂

But then, I got pregnant.  And that baby started to grow ears inside my body.  I started to think about what tiny ears would hear and how swear words affect your environment.

When he was a couple of months from being born, I decided to stop swearing.  It just wasn’t for me anymore.

Now, a lot of people seem to think that swearing is 100% fine.  In fact, my current workplace is probably just as bad (or worse) as the nursing home.  But I am working hard not to pick up the vernacular.  And here’s why:

I’m not saying I NEVER swear.  I just regret it when I do, and I wish more of us would be more respectful of those around us when we speak.  I wish it was a value that society treasured (respecting others).  Of course, I have a whole post about using the F-bomb in labor and I really don’t mind if when my patients swear.  They’re paying me and sometimes that pain can be excruciating.  If it helps — let’s get through it.

Although, my favorite is when older nurses — usually, they are the ones that can get away with it — remind patients that’s what got them into this mess, but I digress….

It’s a commandment that we not take the Lord’s name in vain.  That, especially, means we don’t use his name in horrible combinations with other swear words.  I find that particularly offensive and that is not something I ever picked up.  It hurts my heart.  I wish more people would show some respect for other’s values by not using that one.  I find it terribly offensive and I do speak up to say that I wish they would stop.

Do you ask people to not swear when they are around you?  I am quick to say “hey now — let’s simma‘ down” when it gets particularly bad at work.  I must admit I’m cautious to say it when we are out because I don’t know how people will respond to my query for them to be more respectful (especially if there are children around).

If you have a great way to respond to swearing, I’d love to hear it — put it in the comments!  And, if you truly believe that swearing is OK in all occasions I think we’ll just have to agree to disagree.