Sign up now!
You are here: Home / Health / Abnormal Mammogram: My Baseline Screening at 40.
Health

What to Expect: We’ll explore getting your baseline mammogram and what happens if you have an abnormal mammogram.

You’ve spent your whole life using your boobs to look good in tight t-shirts, lure men and feed babies.  Then, 40 comes along.  What the heck — someone wants to squish them and take some ugly black and whites of them?  Getting your baseline mammogram can be a little scary.  My baseline was an abnormal mammogram and I really wanted to write up a post about my journey and how it all went. 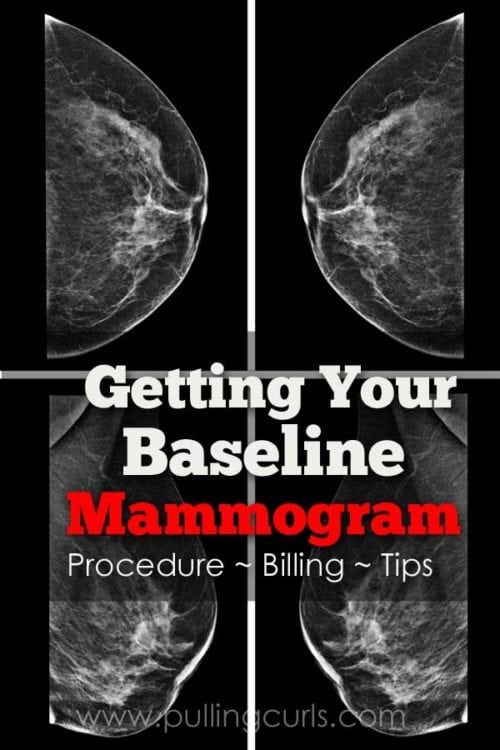 First off, you should be getting your lady parts checked up each year.

Even if you don’t need a pap smear (they keep changing the rules for those in a monogamous relationship) you still need to get your uterus and ovaries checked.  Ovarian cancer is a silent killer.  Yes, the exam is uncomfortable (that’s the one where their hand is inside and they press on your belly — which is when they’re feeling your ovaries.  But worth it.

Side note:  My exam, this time, was done by a newbie resident.  She came in the room for my check up and I told her I’d be happy to have her do my pap and exam.  I got the sense she hadn’t used a speculum much.  But, always be open to having a resident perform exams on you!  They have to learn some way.  Sadly, I could tell her exactly how she was using the speculum wrong.  Somehow I’ve turned into that woman. 🙂

Anyway, at that same check-up, my doctor ordered a baseline screening mammogram.  Be sure that your healthcare provider writes “screening” on it so that your insurance is likely to cover it.  Obamacare (as it stands now — in September of 2016)  requires coverage of SCREENING mammograms, but not diagnostic ones.  That will come into play later on.

After our forever-long summer trip, I scheduled it with the radiology clinic.  I was set to go after a 4-hour computer training at work — which, I think is actually against the Geneva Convention, but I digress.  The place is right next to my work and I really love to consolidate my time.

I went in, checked in.  They had nice gowns and a place to store your valuables while you get it done.  They did let me take my phone back with me.

{side note : There was LITERALLY A haboob (dust storm) at the time I walked in.  Is that a good or a bad sign:?}

You put your boob as noted in this fine photo:

They place your breast, as well as your arms just how you need them, then they tell you not to breathe and snap the picture.  I would guess that each picture takes less than 30 seconds of total squishing time.

Frankly, it did not hurt at all.

Uncomfortable, yes.  Painful.  Not at all.

My kids have done WAY worse things to my breasts than a mammogram.  Not to mention the sag they created. 🙂

**  I will say that if you’re at the wrong point in your monthly cycle where your breasts are exceptionally tender, I would re-schedule.  I tend to only have 1-2 days of that, and otherwise, I think I’d be fine.

But, I also know women who say it is the most painful thing they’ve ever experienced.  I would, personally, put a paper smear as WAY more painful.

Anyway, they take shots of each side.  They also put a little marker on my right breast so the radiologist can tell which is right and which is left.

At my clinic, I was able to get my results if I was willing to wait a few minutes.

Sadly, I got the results that they didn’t like my pictures and they wanted me to come back.

Of course, this time, it would be a DIAGNOSTIC mammogram.  Aka, my insurance isn’t going to waive my giant deductible for that one.  After calling around to about 800 people, I finally decided to let it run through my insurance as I was only going to pay a few dollars less as a cash patient and I would not be able to apply it to my deductible if I did that (and since I was facing possible cancer I decided that was best).

Anyway, a week later (after trying to shove all my nerves down) I went back in.

The second process was similar, but they tilted the table a few different ways (both vertical and horizontal).  This mammogram did apply a bit more pressure.  I found it to be slightly more uncomfortable (but again, not painful).  I think they did 3 shots of each boob and these often included more of my armpit than the initial one — likely to check the nodes.

My sweet mammogram tech did show me what they were looking for.  While my initial mailed results said I had dense breast tissue, I actually had possible calcifications (or possibly the beginnings of cancer — which is why I had to get the second one).  They are SUPER small white dots, and mine were on both sides, right behind my nipple.  You can read up a lot on calcifications and how they decide if they’re OK.

The initially said I would likely need an ultrasound after the 2nd mammogram, but the tech said that they don’t do ultrasounds for calcifications.  The 2nd mammogram would show if it was benign or the next step would be a biopsy {heart drop}.

The good news is that mine came out fine.  I’m supposed to get a follow-up in 6 months.  Yay.

The other good news is that this is my baseline.  Next time they’ll already have the diagnostic one to show if they are increasing in number/size, etc.  Since I had never had one before this, it was important that I have the follow-up.

Anyway, now it’s done and off my plate for a few months.  It feels so good to get something like this done!

If you liked this post, be sure to sign up for all my TMI posts to come straight to your email.

And check out all my health posts right here:

Overweight at Disneyland: Is it Fat Friendly?