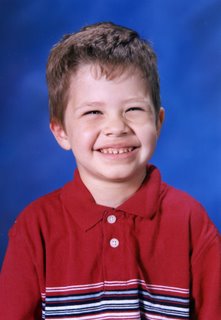 This is Conner’s Kindergarten picture. I went through great turmoil trying to decide if I wanted to spend the 20-30 bucks to get them. But, I’m glad I did. This is his smile that he does when you say, “smile” — which, I don’t say. I’m of the “noodle” or “bellybutton” sayer. Anyway, it’s a delight to see his little face. I think I’ll even treasure it…
When I look at this picture I am reminded of my job last night. We had a dead baby. We weren’t totally aware of it initially. We had some heart tracings on the monitor, but they turned-out to be maternal. When we brought her back and the baby was out, it was apparent that it had been dead a while and the death was called. Such a sweet baby to have her life snuffed out before it even begun.
Of course, initially I stared in shock at the whole situation. I didn’t have a grasp of it all except running around to get some supplies for help. And then we learned that the baby’s death was due to the mother’s drug use. Emotions of pure sorrow for the woman to pure amazement that someone would place their own pleasure above anyone else’s… even this sweet perfect baby girl.
I am grateful for a faith that tells me this baby is in a much better place and my wrapping of her in respect with a pink little hate placed on her head was better than anything she’d ever get from this mom.
On an amusing side-note, we had a police officer, 2 detectives and a coroner come. They felt so out of place and some of us couldn’t help but feeling like we were on CSI. This woman will most likely be charged on something. She was due, and made an obvious decision that would harm her baby (when certain drugs are used they cause too much blood to go to the placenta and it kind of pushes the placenta off the uterine wall, hence the baby gets no oxygen or nutrients). At least there’s a little justice on this earth.

When Will I Go Into Labor Quiz: The signs for this labor predictor