Sign up now!
You are here: Home / Finances & Saving Money / Money Saving Tips / Grocery Shopping: Buying Canned Goods
If there’s one thing I’m really great at — it’s grocery shopping.  I went through a few phases, including overbuying and buying cheap gross stuff.  But, I feel like I’ve hit a sweet spot where I know how much I need of things (or at least how much will fit in my pantry) and I’ve got it down.  I thought we’d tour the grocery store together and I’d tell you my buying plans for each area.

Sure, cans have BPA, but they are awfully handy, and I’m sure that the ziplocs I sometimes store dried/cooked beans in the freezer probably also have BPA.  I’m not sure of a better alternative at this point, for most of these items.

Here are the cans I keep in bulk, in this you’ll see the item, the # I keep on hand, and my target pricing for the item 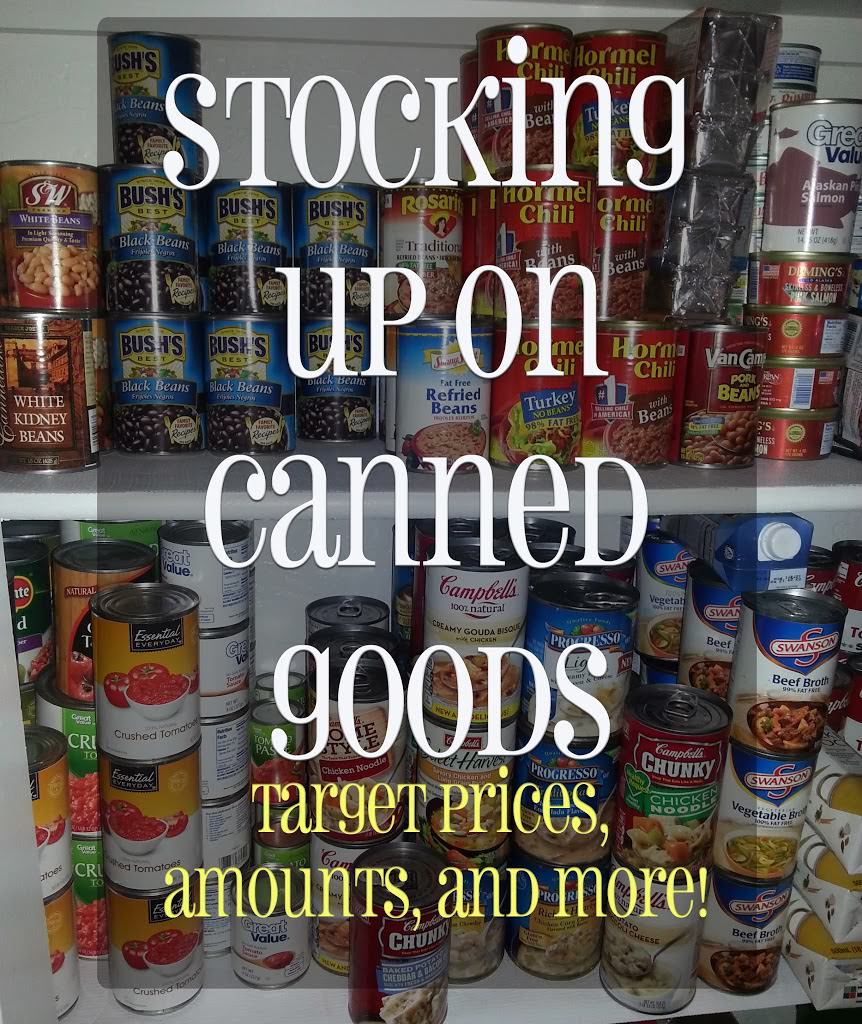 Yipes!  When you type it all out like that, it’s quite a lot!  Canned items, are probably the bulk of my food storage, and probably the easiest to stock up on.

Note:  Target prices are prices I am hoping to get.  I notice when I’m low and I just shoot for a price CLOSE to that price.  Do I always get it?  No, sometimes it’s a bit lower, sometimes a bit higher.  It’s just a good idea, to have a target price that’s good for items that you buy frequently.

Note on Quanities:  They are constantly being adjusted by how much we use an item, as well as how much space we have to store the item.  I used to want 20 cans of evaporated milk, but I just don’t use it much any more and I’d rathe have the space for beans.  I went through a phase where I thought I should have canned vegetables, but we NEVER used them, so it was a waste.  Anyway, you need to adjust as needed.

Is this helpful?  Would you want it for other grocery isles?

I will say my target price here is lower on many items then it was in CA.  I will say that some of the items it’s just the same, so who knows.

If you’d like to learn more about my grocery plan, you can read more here.