Get Started!
You are here: Home / Parenting & Family / School / 7 MomHacker Tips For When Your Child Wants to Quit

“I just want to quit mom.”  When I hear those words, so many emotions run through my heart.  I feel for them.  I know JUST what it’s like to want to quit.  I think — we’re NOT QUITTERS.  “We can do hard things.” We ARE doing hard things, YOU NEED TO DO THIS!  I also think if there’s a happy medium between what they’re doing and quitting.  I feel for my kids.  I don’t always enjoy watching them do hard things.  Sometimes my child wants to quit.

But then I remember this:

Princess P had spent 2 summers in swim lessons.  Totally charming her teachers into a random bubble blow and possibly a dunk.  She HATED swimming, and we live in an area where I hear about kids drowning ALL the time.

She absolutely HATED these swim lessons.  You’re lucky that video has the Harlem Shake in the background, or you’d just hear kids crying the whole time.  So many pleas to go potty, so many pleas to get her out.

And then she swam.  And I’ve never seen such pride in a child of mine.  Something she TOTALLY thought she couldn’t do – -something she actually feared.  She conquered it.

We can do hard things.

Now, not every event is something you can blow in their face and shove them under water and hope they come up with a ring.

Just recently I had a child try out for the school play.  This particular child pretty well thinks he walks on water.  He can do no wrong and is probably the best and the brightest that God ever made.

I do my best to cut him down, but sometimes I forget, and this was one of those times.

He thought for sure he’d be a lead or perhaps he’d just be the director and the teachers would just bow to him. {sigh}

He got a small supporting role — which was actually great for someone his age.

But all heck broke loose.

{insert fierce mamma dragon eyes}  I couldn’t believe my kid was saying this.

So, here’s a few tips for kids who want to quit:

When you see something that might challenge your child, maybe remember to mention this is going to be tough.  Maybe put that birdie in their ear that things might not go according to plan.  This is my downfall with the play.  In order to get him excited to try out, I talked about the main characters and how fun it would be.  I failed to mention that he’s young and he’s likely to NOT be a main character. #fail

Tell them that life often sucks, things are hard.  I’m pretty sure you could insert a story or two about your own life sucking.  Yes, this is hard.  I can see why you’d want to quit, I might even feel that same way too.  I sure do love you, and I’m sorry you can’t go through this.

I read this in a book once and it’s one of my favorite parenting techniques.  “I wish I was magical and could make it so ________ could happen (or not happen).”  It’s just showing them that it would take an act of magic, which you do not posess.  It’s a favorite standby of my own, it works well with quitters.

Talk about what will happen if they quit

Talk about the real life consequences.  For swimming, it would be that I would find her face down in someone’s pool, dead as a doornail.  She was 3, so I chose not to lean that direction.  In reality, I didn’t have a quitting talk with her.  I mostly sypathized.  For the play we talked about how the teacher would feel, and if it would hurt his chances of being in future plays if he was unwilling to play a smaller role.  We talked about how it would look to his friends.  We talked about how he would feel inside when he saw all of his friends having a great time doing it and he wasn’t.

For the play we talked about how much fun it would be.  We were able to talk with someone who’d been in these plays before and he mentioned what an amazing time he’d had, even though he was never a lead.  That really helped.

If possible, leave the choice up to them.

After all the talking, I left the choice up to him.  This wasn’t a life or death thing, it was early and he hadn’t committed to a choice that it would really hurt others.  This would only hurt him if he dropped out.  He chose to stay in.  For swim lessons, there was never a choice.  It was me shoving her in the pool area and looking away.  Thank goodness for wonderful swim teachers.

I think that quitting is sometimes the best option.  But I think they need to have the full perspective (as shown above) before they can really make that type of choice.

A week or so after the decision was made, follow-up to see how the decision worked out for them.  This is a key step.  He might want to quit something later, and hopefully I can remind him what a good choice it was to stay in.

**I will say that we’ve had kids drop out of band half way through the season and it is a HUGE issue for everyone involved.  You really need to make it clear all the people they’re hurting by their decision.  They also need to be willing to take whatever consequences it brings.  Things like a failing grade might come along with it.  Be sure to detail those possible outcomes with your kids so they can see the full picture (something kids are not great at).  Lara at Overstuffed has a great post about quitting music lessons on her blog.  I really like it.

Dealing with a quitter can bring out the mamma bear in so many ways.  Mad because they’re quitting, and mad at the group because you love your baby bear.  And mad because her porridge is always cold.  The key is showing the big picture.  They’re small, they need someone higher-up who knows what the big picture looks like.

Be sure to join my practical parenting newsletter, and check out my other parenting posts below that: 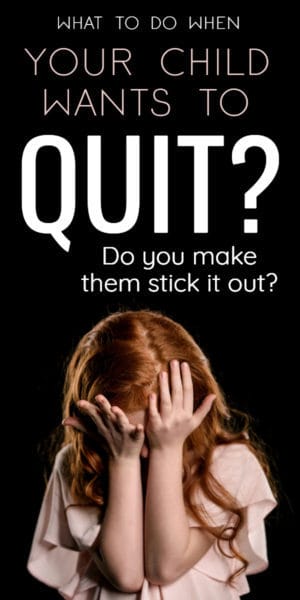