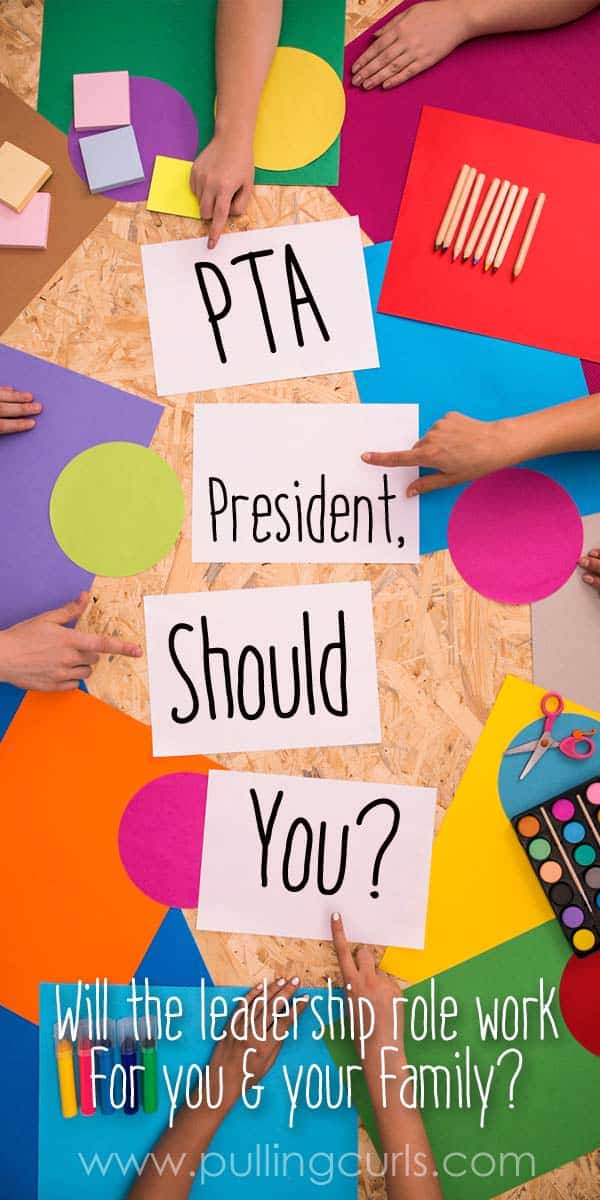 Once upon a time I laughed at people who were the local PTA president.  How sad that they were unable to resist the pull of deep volunteer work.  I wasn’t ready to get mired down in that.

Flash forward to our move to Arizona, where I took on the carnival within a few months of moving to the school.  A couple of years after that I was ready to give up the carnival and I was approached about being the PTO president.

For two years I was PTO president (one year as a Jr President, and one as the lead president).  As my year came to a close I really started to look back and think if I was happy or sad that I had done it. And this is what came to mind:

I didn’t have my crystal ball.

I really thought that my “lead” president year was going to be pretty low key, but in reality, it was probably one of the toughest years of my life.  I had kids at three different schools.  My husband left his job and I was left to make all of our income along with being PTO president.  I, never in a million years, would have thought that would have been our family’s plan at that point.  But it was.

I was unable to let things go that were falling.

When events weren’t taken care of, I went and tried to fix it — instead of just letting it drop.  In reality, I’m not sure what the president’s job is in this situation.  Is it her job to take over — or is it not?  I wish I had let things drop.  But, that’s not really my nature.

The complaining overwhelmed me.

I was prepared for parents complaining (but it does wear on you), but I was more surprised by what the staff complained about.  And by surprised I mean it really made me want to quit.  In fact, I did throw down my binder at one point and tried to  walk out of a meeting.  I later re-thought it and stayed with it, although that entire incident aided in a pretty ugly downward spiral in my life last winter.

I met so many amazing people.

That was certainly the largest bonus.  During my tantrum as mentioned above, I really found who my friends really were.  It’s nice to know you have people who have your back.

I tried new things, I did feel for working parents, low-income parents and I really worked to have all voices heard in our PTO.  I think that’s really tough, but I tried.  We changed up a few things, and I do like change.

And ultimately, I wish I hadn’t done it.  But, I don’t think I ever would have guessed how hard the year was on me.

It was also the same time that I came to my own truth and realized that I was packing my life so full (with things like PTO president) that I wasn’t able to have fun and be free.  I felt shoved into a tiny box of all the things I needed to complete.  I felt constantly let down by other parents which just made my box smaller and smaller. If you’re thinking of being PTO president: My main benefit was enjoying the people I worked with.  The vast majority of the staff at the school were uber appreciative of any time that we gave.  I did find a lot of pleasure out of helping them out and making a difference.

I also really got to know myself.  I learned that I was pushing far too much in my life.  By the end, I had sort of figured out leaving spots for fun even when I was really busy.

And that, my friends, is it.  You’ll just have to weigh the plusses and minuses.  And, if you have a crystal ball I’d love to borrow it every now and then.  Either way, it is SUPER important to help out at your kid’s school.  It shows them how important education is to you and they will succeed.

Have you been PTO president?  Were you glad you did it in retrospect?  Either way, I bet many people were grateful for all the work you did.  Hugs from one to another.  Differences are made one person at a time.

**I used the words PTO and PTA at times in this post.  I have been a member of both and they are really similar.  If you have other questions about PTA or PTO or just school in general, check out my book School Mom.  It’s going to walk you through the best ways to help at school, find out a bit more about how the school district runs and even the big question — how to get the teacher you want.  Check it out today!