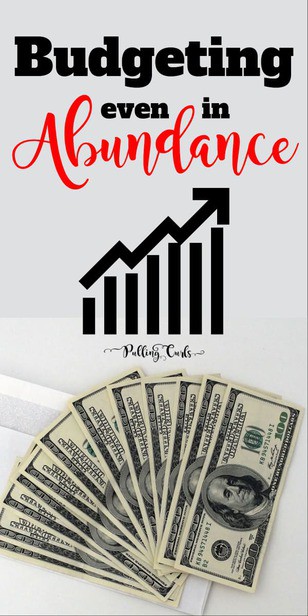 Abundance mentality makes you feel like nothing is holding you back.  How do you balance that vs the principles of sound budgeting? 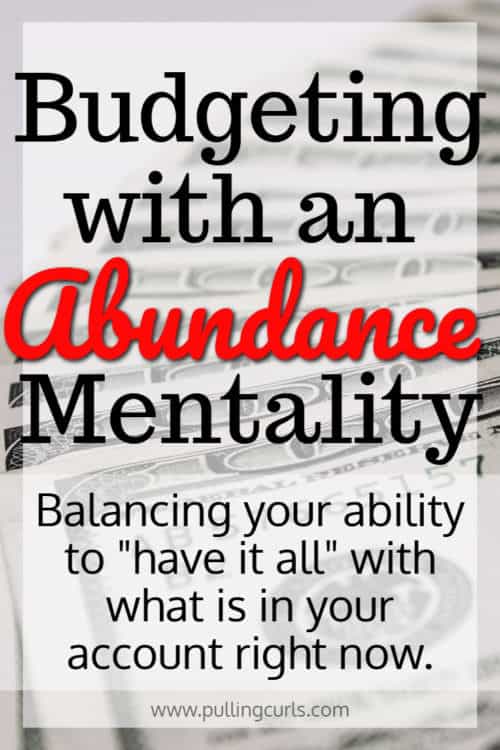 Abundance mentality budgeting is a way of sound accounting combined with being able to receive all the abundance that is offered to you!  It’s a difficult balance.

I have written some very hard-line budgeting posts.  And frankly, it’s been hard to write this one for a while.  I don’t want you guys to think that I’m a spendthrift.

But, I no longer follow strict rules of budgeting {can you hear the subscribers hitting unsubscribe?}.  But wait, read on — maybe this post can help your mindset.

After my husband left his job, I started taking some classes on abundance and really being open to new veins of income.  But, the one thing that I really felt was limiting me was those hard numbers.

I felt that the hard numbers left me in a scarcity mindset.

My new budget is running off of 4 principles:

I have cash on me all the time

I took Carol Tuttle’s Money Makeover a few months ago and it really helped to change my mindset on a few things.  I have always been concerned that someone would steal my money if I had too much in my wallet.  Now, I don’t go to her lengths where she keeps 100’s in there, but I always try to have a little cash on me.  It’s a physical reminder that I have money, and I can get more.

We have enough money for our needs, and plenty for our wants

If we truly need something, I just buy it.  There is no reason for us to be limping along with something that is truly a NEED when I can have it shipped to my home from Amazon in just a couple of days (or grab it at Walmart).

Of course, you do need to be very honest about what your needs are.  I had a cell phone charger that had exposed wires.  I was going to keep limping it along — but that really didn’t make sense.  Just buy a new charger instead of getting electrocuted. 🙂

Previous to this, I would have limped along with it until the budget $$ renewed.

And I, personally, felt like that made me just want more and more things (and, I’d spend more and more once that budget money was “renewed”).  I also just felt like we never had enough money… and that wasn’t how I wanted to feel.  You can read about that in my post on the magic of having enough.

As for wants I really evaluate them.

We have recently really started paring down on the things we bring into the home.  I hate organizing them and I feel bad when I throw them away — so I’m really trying to bring in “wants” that I’ll value.

And frankly, by having enough you often find the wants aren’t as bad. 🙂

We will get more cash, it is a steady flow that is increasing

I always felt like money was a finite principle.  There was a set amount and I could just get that amount.

But, now I believe that money can come in many forms and ways.

Now, having your own business makes that all a little easier, but I think that money can come in many ways to people.

I think that when we lived off a nurse’s and a teacher’s salary we felt like we just had a fixed amount of income and could never increase that.  And that, my friends, never did us any favors.

Believe that money can come to you in new ways.  I envisioned money flowing to us like a river, and it really did start to!

It really does sound insane, but I felt like it calmed me down enough to let it work it’s process.

That’s all it is.  It’s not a measure of success or something that makes us prideful and arrogant.

I never worry about having enough air.  It’s always there.

I don’t worry about using my screwdriver.  It’s a tool.  I’m using it to get work done.

That really takes the stress out of it.

Money is a tool.  Use it.  Don’t be worried it won’t be there.  Don’t over-use it, or use it in times that another tool would work better.

I also follow a 100% cash principle as well.  I NEVER believe you should spend money you don’t have.  You may have to tighten to actual needs for a while and hopefully, as your abundance increases you can loosen for your flow.  I know it’s worked that way for us.!

This doesn’t mean that we only USE cash — but we use debit and credit cards wisely (love my cash back) and make sure we have the money to back it up.

So, that’s our budgeting in a nutshell.  I made a hand printable with these reminders – maybe you could make it small and put it somewhere you’ll see it frequently.  And, check out my other family finances posts below that: