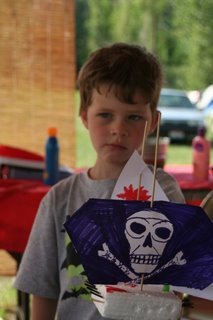 I always get so caught-up in Conner’s cake sagas that I forget to say what an amazing kid he is on his birthday. SO, this post is dedicated to Mr. Conner and the great guy that he is!
Conner is extremely smart. I don’t tell him that, but he is. He is also really dedicated and is willing to work hard. Things I prayed hard to have a kid who was either born with those insticts or I could help instill those virtues into their little brains. Just now he’s doing his “hard math” workbook really well. He does so much with his brain, sometimes I have to bribe him to get him to get outside and use his body just as much. For now, we are using popcicles as the bribe (and the cool-down since it’s been so hot lately). Even though he’s smart, I don’t think that he feels that he is smarter than other kids. Which, is my most favorite thing about him. He’s a just a regular Joe in his mind. And, he is.
Conner has adjusted really well to having a little tag-a-long. He and Spencer, especially during our trip, grew really close together, and had a great time together then and I can see that bond has even lasted now that they’re home.
Conner is my little buddy. I’m so glad he’ll still hold my hand, and I hope that lasts at least another year. Although there are some days I could sell him on ebay, there are many more that I don’t know what I’d do without him.
** This post seems a tad too braggy as I read it back to myself, but a gal’s gotta brag about her kids every now and then, especially on their birthdays… right?**