Sign up now!
You are here: Home / Uncategorized / The Blog About Wicked 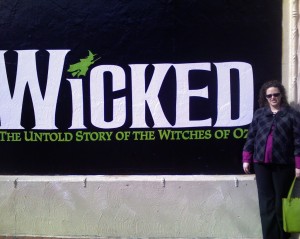 I was waiting to get some pictures off my phone (yes, I didn’t even take my big camera, that’s just how pregnant I am). I don’t think I can express what a HUGE musical theater fan I am. HUGE, people. I love it. I loved being in the pit, and while I don’t exactly have the talent to belt-out the gold old show-tunes, I like to pretend that I do. Just ask my kids and Drew. You’d think I was Elpheba incarnate in my car. Feel free to ask me to sing the soundtrack to Okalahoma — you’ll feel the wind rushing down the plains. 🙂

Transportation We took Bart, and huge props to whoever on 2P’s told me to do this. It drops you off RIGHT in front of the theater. We parked at the Millbrae station and it was 4 bucks each way for us to go into the city. I’m sure we would’ve paid more then that in parking (parking at the station is only a dollar) in the city, plus the hassel. I found Bart to be fairly clean, the station was really nice. If we did it again, we might even ride Caltrain to Millbrae (this would’ve added about 17 dollars to our trip — fyi) because Drew and I enjoy talking while riding on the train and watching all the traffic stopped next to us. And no, we didn’t pick a baby name on the way. Thanks for asking. What do you think of GA-linda? 🙂

Food We ate at the Market Street grill, which is just kitty corner to the theater. I ate WAY TOO MUCH, and I paid for it on the scales, but it was yummy and worth it. We don’t splurge often (as of late our dates have been splitting a burger at St. John’s and some cheese fries), but this was worth it. Plus, you can get back onto Bart right 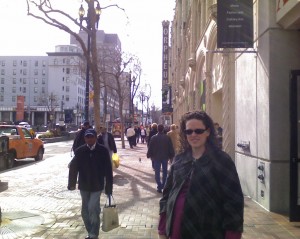 next to the restaurant — and by the time we were done my feet were SO swollen this was a huge plus.

The Theater We saw it at the Orpheum in downtown SF. It’s a GREAT theater for Wicked — very Gothic. I really want to read up more about its history. They must pick the shows that they show there, because it’s hard to imagine something upbeat like Annie or Sound of Music at this theater, because of its gothic–ness. It has a lot of great carvings, etc. It also has a little farmers market in the rear that we perused before the show.

The Show OMG, I cried at the beginning. Not like sobs, but the throat got tight. Have I cried at the birth of either of my children? No. But I did cry at this. I’d been wanting to see it for SO long, and I just felt very blessed to be able to be there, and that everything had worked out (btw, huge thanks to my friends for babysitting, when you’re up in the city for so long I was nervous about just having a teenager babysit so it was extra nice that my friends stepped up — plus, the kids had a great time too!). Elpheba and Glinda are amazing. I can’t say that I was completely wowed by Nessa Rose, the Wiz or Fiero — but they were all great (just not, OMG where’d they get their voice? great… does that make sense?). The sets and costumes, the whole thing. Just loved it. Plus, I love how grown-up and normal a mom can feel from a night like that. I’ll be honest, Drew and I would go to a show every month if we could, but tickets are a lot (we went on a weekday matinee, got the cheapest seats I could find — but they were still great — and our total was still near 200). I told Drew I want him to find out about some of the local college plays at least. Anyway, would I go again — no. Too much $$, but if it was cheaper I totally would! I’d love to see it performed by different casts too. I really like the story behind Wicked — whether you are born wicked, or the fact that people keep calling you wicked makes you so. For those of you who have no idea about the show. Glinda and the Wicked Witch of the West are college roommates, that’s the basic idea. It has great music, but poor orchestration (seriously, the pit only had like 10 people in it, that’s kind of sad). It is nothing like the book. Well, I mean the book and it have the same premise, but I only made it about 1/2 way through the book before I grew tired of the smut, not so in the musical.

Anyway, I’ve ran out of things to say and I need to hurry and clean before I need to head off to work. Just a huge day for me, so glad we did it and I VOW that we will do this at least every year — find a show that we love, and go. It’s worth it, even if the rest of our date nights are splitting a burger. 🙂