Sign up now!
You are here: Home / Uncategorized / Christmas Party Photos… get in the spirit (DANG IT)

Last night was the ward Christmas party, and yes… Garth G rocked it out on the drums, and Conner rocked it even harder clad as a shepherd. The primary kids dressed up as shepherds and angels (yesterday afternoon Conner told me he wanted to dress-up as an angel I told him I didn’t

think I had the fortitude to lie that hard — ok, I didn’t, but I wanted to). In perhaps the most 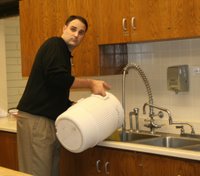 shocking event of the night, we learned that Justin Spencer DOES DISHES, and actually can clean like a merry-maid. Check him out, looking like I found him doing pot, instead of cleaning out the juice container. Nice job Justin (Catmull put me up to this). BTW, Conner asked Santa for a fantastic four costume. Seriously, do they even make those? And why on EARTH wasn’t that SANTA’S RESPONSE? Oh well… at least I got him to get a some “good boy” reminders in. Love that Santa fella.