I want to bring back Favorites Friday because there are SO many wonderful things that I LOVE using out there.

But today, I want to talk about this. Because that was 17 years ago today (it was even on a Friday!).

Drew and I have been reading a great book whose name I can’t remember and I have 600 things on my plate today but it’s been talking about re-kindling our friendship and talking about the emotions we had before we got married.  I sure loved this fella, but I had NO idea what I was in for.  It’s been a great, long, hard, exciting, thrilling, gasping for air at times ride.

I wouldn’t want to RIDE this ride withanyone else but him.

We had a wonderful wedding, most of which I can’t remember.  We had over 500 guests to my reception and I maybe knew 200 of them, 100 well.  We were greeted with THIS car when we exited. Rolls and rolls of seran wrap, oreos, toothpaste, frosting…. I burst into tears.  It had been such a long day and the long awaited (because we were Mormons, married in the temple — aka, virgins) wedding night was splayed out in front of us.  We may have sold that car (YEARS later, in California) with toothpaste still under the door handles.

But the thing I remember most was going to the alter with him, and knowing that what I was doing was SO right.  I had made a good decision and had lived my life in such a way that I could make such a decision.  Sometimes I have to think back to that decision and remember how very right it was, and life is bumpy.

Drew is a wonderful man, and I’m sure I didn’t know how wonderful he would be when I married him.  He is smart, funny, laughs at ALL my jokes {well, most of them}, super ticklish, a hard worker and he loves me and his family through eternity.

Turns out, that’s just how long we’re married.  Happy anniversary, Drew.  And because I knew you all wanted more pictures.  Check these babies out! 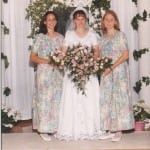 Me & my bridesmaids (whom I still adore) 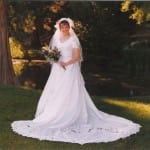 My bridal pictures were taken at the Botony Pond. 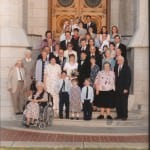 The lot of us at the temple… so happy to see all these people in one picture. Wish it could still happen. 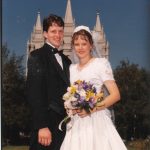 We were married in the Salt Lake Temple 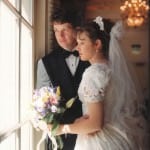 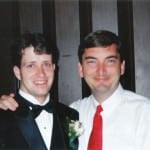 Drew and his BIL Gene 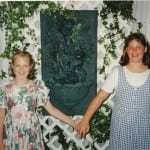 Haha, look at my cute cousins. Somehow this makes me feel even more old now than seeing how young I looked!