Sign up now!
You are here: Home / Uncategorized / Home, night 1 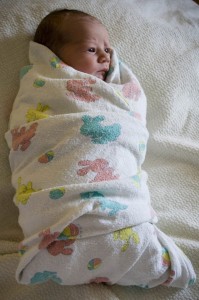 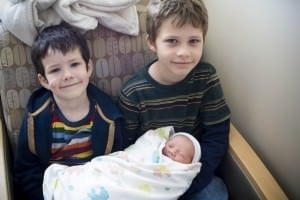 I always hate the first night home. I dread it. In fact, I was almost having a panic attack on Thursday night at the hospital. I don’t know if it was hormones or what — but I know the world shatters once you’re on your own — it always does.
Anyway, yesterday lived up to my expectations.
The boys were INSANE. Running around the house like rabid dogs, just couldn’t settle. I really tried to be cool about it. I know they were happy to have me and P home, and because I hadn’t been there for them the past couple of days I tried to let that all go… but I was pretty dang happy when Drew took them both to pack meeting.
Anyway, she hasn’t slept too well since we got home, and I think that has something to do with the blankets I was using to swaddle her. She likes to have her hands by her face, but I’m also pretty sure she’s waking herself up once she wiggles out of the swaddle.
Last night she was up every hour and a half. She was hungry each time, but I think we might as well have called her piggie. The first night at the hospital she drank 2 ounces twice. Little fatty. The nurses told me to try and limit it to one ounce at each feeding. I need to look back and see how much Spencer drank at this age. She seems to not ever stop… so we’re just pulling the bottle away at 1 ounce ingested. At 5:00 am I finally figure out a new swaddling technique (I use a receiving blanket underneath, and pin her arms well with that stiffer blanket — and then use the flannel ones I made her on top for more warmth) and she slept great til’ we woke her up at 8 am. That’s right, we woke her up. I even reviewed my Babywise technique before getting out of bed this morning. She also seems to like the Nuk binkies more than the Avent ones. I think I’ll be sending Drew to the store for a couple more of those.
Anyway, that night’s over, and I’m hoping it’s our worst. Of course, one benefit to no breastmilk (seriously, none people — and I’m still pumping every 3 hours) is Drew and I switch feedings. However, last night there was a fair amount of crying. I think she was overtired and hitting herself when she was asleep. We still really like her though — and with a face like that top left photo, who wouldn’t?
Pin
Share
Email