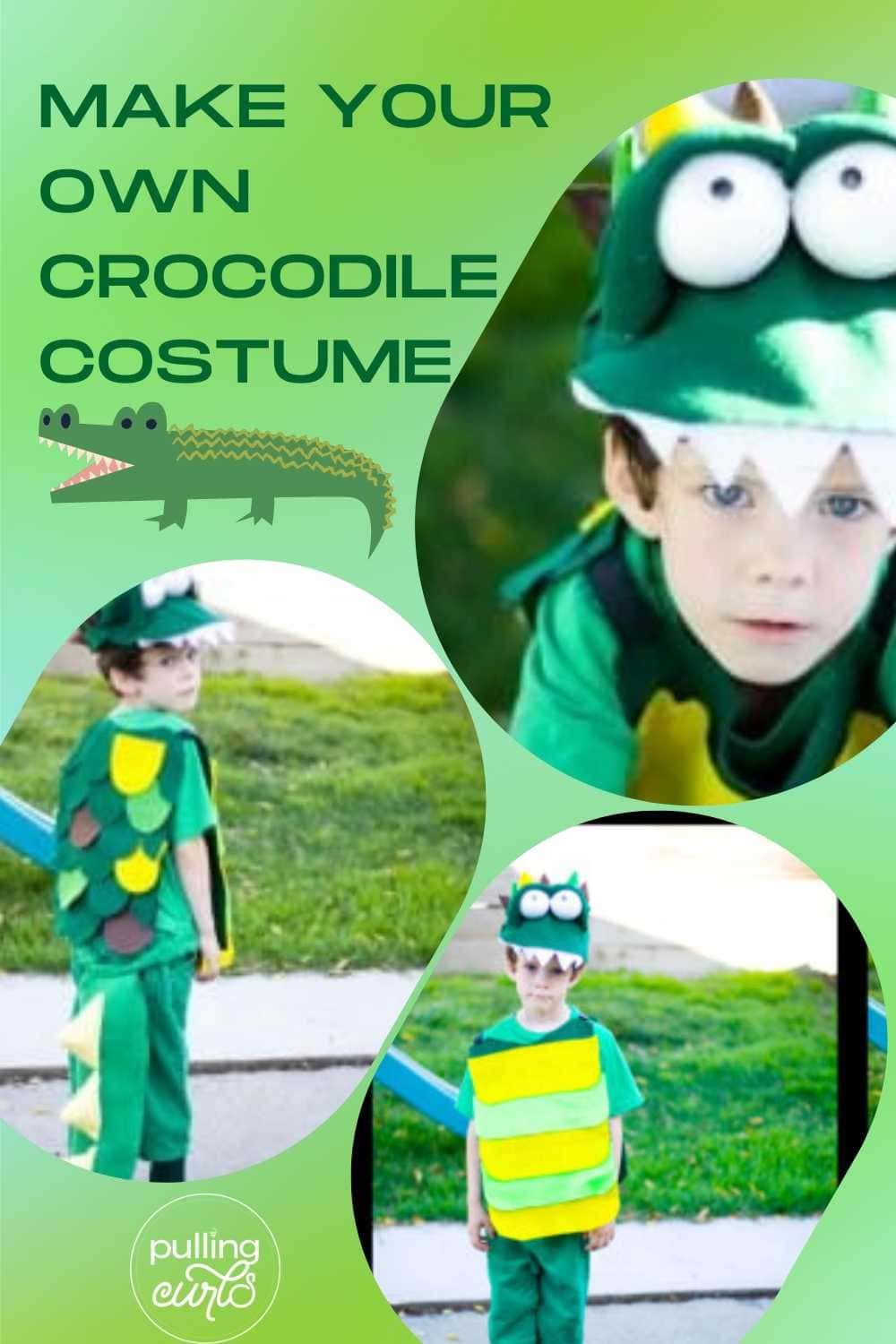 Let’s make a DIY Crocodile costume. Homemade costumes are the best, and this one is no exception. We’ll make a hat, a vest and a tail for your little one to strut their stuff at a costume party this Halloween season. 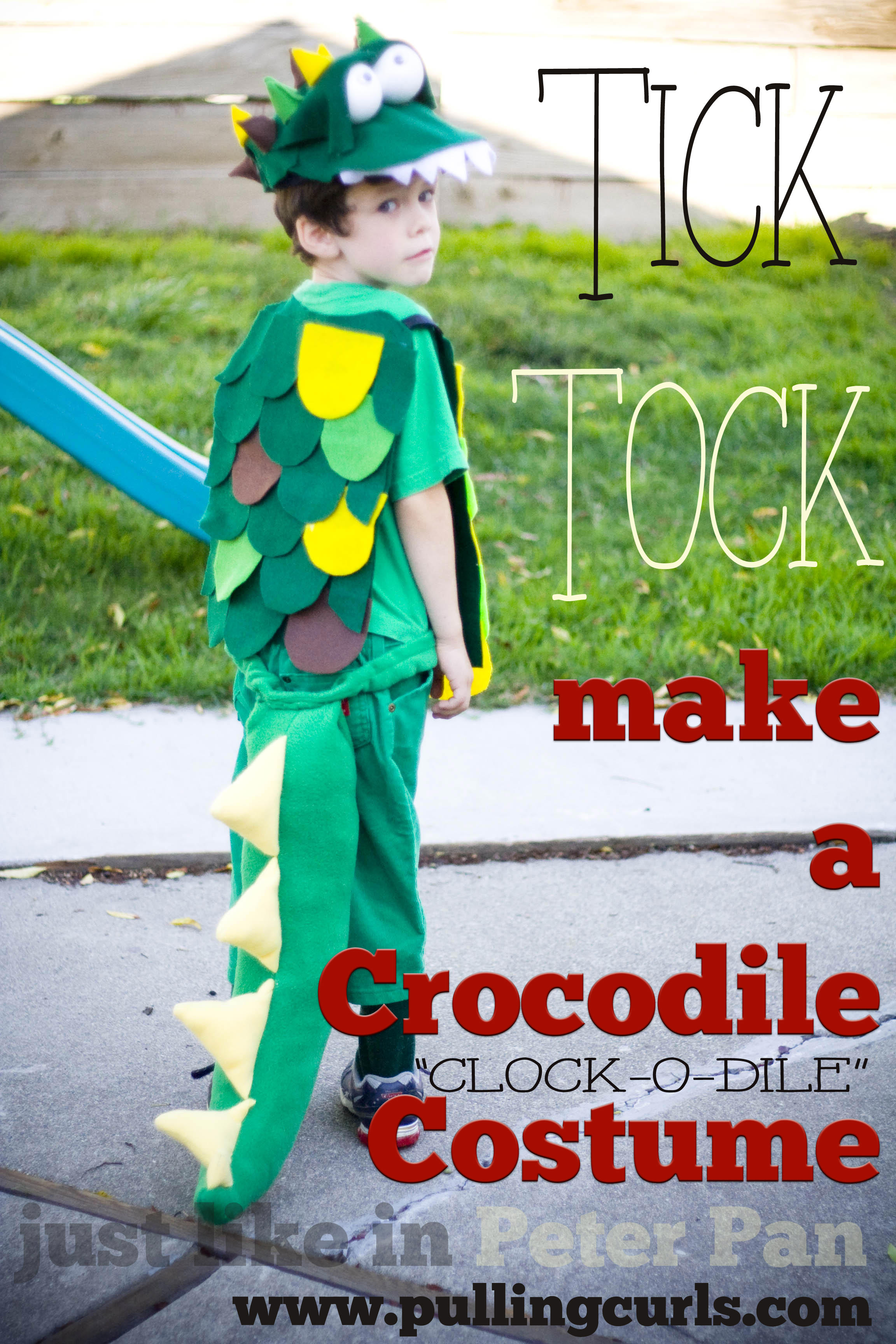 Besides the Yoda costume, I think Spencer’s Crocodile (or, it could easily be an Alligator) costume comes in second place for taking the most of my fingerprints away. Let my mistakes in making this crocodile costume help make your attempt a lot easier!

When discussing what we were going to do for Peter Pan, Conner nabbed Peter at first chance. Drew would obviously be Captain Hook, and P tinkerbell… but what did that leave Spencer? I gave him options of an Indian boy or a Lost boy — but the little guy wanted to be the clock-o-dile.

Ok, so to make this easy Halloween costume, the clothes underneath are green. We found them at Goodwill (always check your local thrift store when creating your own Halloween costumes)… The pants were WAY too short, so we put some green soccer socks on. True Story. 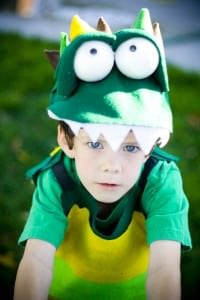 I found a green hat at Goodwill to make the crocodile head, or you can grab one here.

I bought a LOT of green felt for this costume (and for Peter and for TinkerBell). I covered the hat with the green felt, gluing it on with a hot glue gun. I then took pieces of a lighter green, brown and yellow — and made little “spikes” (I cut out circles and made cones out of them) and then glued those on the top. I took some styrofoam balls and glued the largest google-y eyes I could find on the front of those) and then glued them on the hat. I then covered them in green felt (over the top — to kind of make “eye sockets”). On the bill of the hat, I glued crocodile teeth that I just cut from white felt. It’s basically felt and hot glue. oh, and styrofoam eyes. And my fingertips. 🙂 Oh, hot glue — such a frenemy, but it helps make awesome costumes. And now you have your crocodile face! 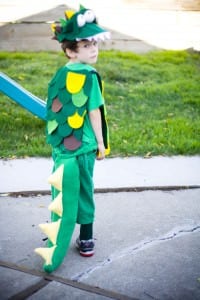 I just cut out a rectangle for the front and the back and then glued on strips of fabric to be the croc’s belly. The two sides are held together with strips of velcro (in case I need to make it longer or shorter) that go over his shoulders. On the back, I cut out “scales” out of the same things I made the “spikes” out of on his hat. You can see it pretty well in the photo.

I cut a strip out of fleece, and made a little belt and closed it with velcro (again, it can be made bigger or smaller). I made triangles out of yellow fleece and pinned those onto a green fleece tail shape. So, what I would do is sew (right sides together) the spike side of the tail. Then sew the rest of it, leave a small edge where you can turn and stuff it (when you sew the spikes in, they will be inside the green fabric). Turn it out and then stuff it. Stuff it a lot because kids are crazy with their tails and you don’t want it compressing and being all sad. I may have made it a bit long, I think it came a little too close to the ground for Mr S.

I had thought of making claws or something…. but I think it’s good without it.  i wanted to make him a clock (since he was chasing captain hook) but I was told that wasn’t necessary.

This one doesn’t come as a pattern.

This one doesn’t have a mask, it has a hat, which is easier for kids to do themselves (and not get hurt as they maneuver)

This one has a great hat that is made using covering a hat in felt and using some styrofoam balls or ping-pong balls to make the eyes).  We got the hat at a thrift store to save money (you could also use a hat you already have).  You can use the same idea for an Alligator hat!

Whether your kid is an animal lover or you just need to make some alligator costumes, this is something you can do fairly easily at home. Have your ever made DIY animal costumes? Tell me how it went for you.

If you liked this post, I’d love for you to join my practical parenting series and please, check out my other costumes: