Sign up now!
You are here: Home / Uncategorized / Meet my buddy darth… 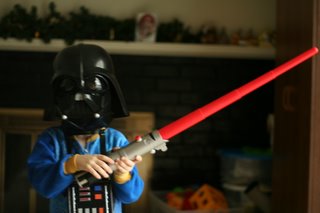 You know, you really haven’t cleaned your house til’ you’ve cleaned it with Darth Vader at your side. Conner has his Darth Vader voice changing mask on about 30% of the day, 75% off waking/non-eating hours. Oh boy… is it fun. Mostly he just breathes into it, not a big fan of the way his voice actually sounds in the VOICE changer (note, not a breath changer, and it actually has a button for the ACTUAL darth respirations). Spencer follows him around the house trying to make the darth sounds as well. I’d say it’s time for me to just put some side buns on and just join-in at this point.
Spencer got that Leapfrog Alphabet thingy that normally goes on your fridge (I found it so annoying I got a container from Big Lots to keep it in the playroom). It sings the alphabet song. It’s too funny because he just says A – B- B- B- B- B- B… get my drift? I have taken note that many of the letters in our alphabet sound like B — and, really, why take the time to pronouce them all?
Tis the season my friends, tis the season.