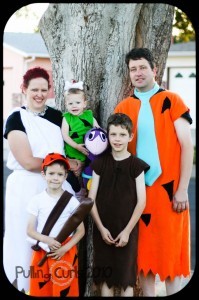 Flintstones!!!!  We’re just the modern stone-age family, of course. 🙂
I’ll have to admit, these costumes were SO easy.  I knew I needed to make them, when I got the idea from some website.  Thank you internet.  And without further adieu, I’ll even provide instructions. 🙂
Miss Pebbles was pretty darn simple.  Just put one of her large shirts on a piece of flannel and just made a little pattern out of it.  Then sewed-up the edges and left arm and neck holes.  I sewed on the black triangles to everyone’s costumes.  Since they’re made out of fleece, I didn’t think glue would work as well — plus I like to keep everything as washable as possible. 🙂  The bone is stuffed and just glued onto a clip.  The adorable baby is also by me, with a bit of help from Drew.  Aren’t I talented? 🙂  I just used leggings for her bottom.  The extra nice thing is that you can add layers pretty easily under these, depending on the weather. 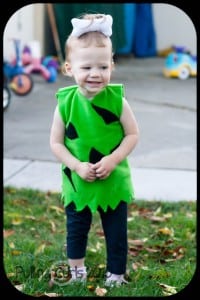 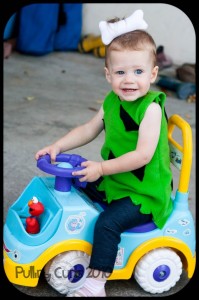 And here we have Mr. Barney himself.  Sad, Conner’s an awfully skinny Barney but his height is just about the right size compared to Fred.  His is the same as P’s (I took shoulder and waist measurements on everyone and then figured out the length and then just kind of cut squares of fabric out, sewed the sides leaving arm holes and a neck hole.  On his top I cut a longer V-neck and then put some string to make it look more like Barney, and add a small bit of detail. 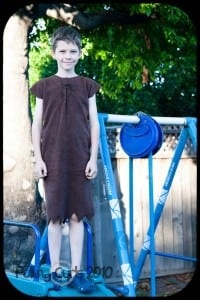 Conner kept wanting to do this crazy cartoon face.  Super Barney-like, right?  Well, he thought so.  Here you get your first glimpse of Dino.  The hardest member of our family, but I’ll get to him later. 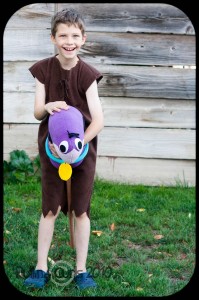 Oh Bam-Bam, how did you get so cute?  His is a skirt, a white T-shirt, I Sewed a strip of brown fleece and a bone, and stuck it through it.  His hat (I could only find a plain orange hat on Amazon) has traingles also glued onto it and I made him a white pom pom to go on top.  His hair is spray painted white, but you can hardly tell.  Caveman club is also courtesy of Amazon.  Thank you super saver shipping. 🙂 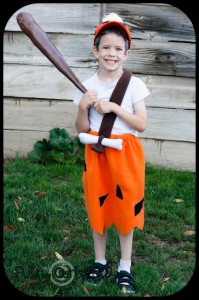 Here are Fred and Wilma.  Mine was the hardest person costume because I had to figure out the dape on my (unlike Wilma’s) totally flat chest.  It wasn’t too bad, and I gathered up the other side with just some ribbon.  I found those awesome beads at J’s and the hairspray is from Sally Beauty.  Delicious, isn’t it?  Sadly, I just don’t have Wilma’s figure.  Crying shame.
Fred is same as Conner’s pretty much.  The tie is also out of fleece, I did 2 layers though, just to make it a little more firm.  Looks pretty great, if I do say so myself. 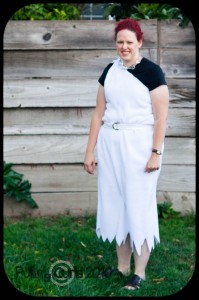 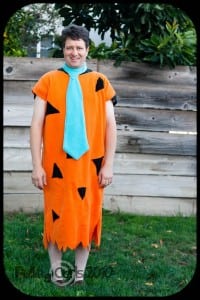 Here’s Dino.  I just made him like a broomstick horse.  Honestly, I’m not sure how it all came together.  The mouth is sewed on, and the spots are sewed, I glued the eyes so I Coudl be sure of plaement.  Umm… he looks ingenious, but he wasn’t really all that bad.  Now, if I can just get the kids to stop fighting over Dino’s head.  Darn you stone-aged kids.  Or maybe they’re sone-brained….  There’s a really great picture of ME and Drew riding Dino, but i like to keep this blog G rated… 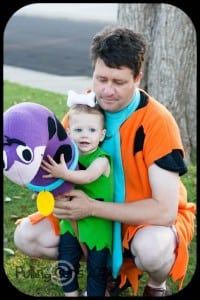 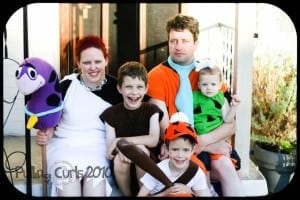 I am guessing our totaly cost was about 60 bucks for all 5 costumes.  The main purchase was fleece at Joann’s (bought at 50% off on a sale day)– I think that was around 47 (and I always buy too much).  Spencer’s extras were about 10 bucks, and the dowel was like 3.
And, there you have it.  AND no one hates music on blogs more than me, but i just thought this special day shouted to have a little theme music. I hope it didn’t wake the wee ones.  Happy Halloween everyone! 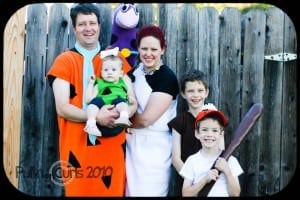