Sign up now!
You are here: Home / Uncategorized / What’s up Wednesday: Gettin’ My Craft On

First off, guess who got her craft on.  I KNOW.  It’s been totally missing for quite some time, but I really liked this project, and I thought of a few more while I was there.  I made a greeting card holder, mostly because I want to see all my friends smiling faces staring at me…. I love them all so much. 🙂

Anywhere, here it is completed. 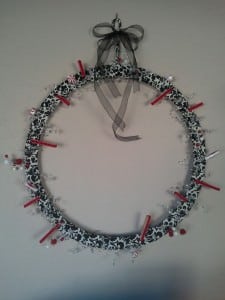 I just took a wreath wire, and bought fabric, ripped it into strips and covered it.  Then, I wrapped it with some crystal-y garland I found at the Hobby Lobby.  I was going to go all Christmas, but I’d actually like to keep it up year round, so I just bought this black and white stuff.  I think it’s pretty classy (honestly, I don’t know if it fits into the rest of my house).  BUT, I also wanted it to be Christmasy, so I tucked in some small picks to make it a bit more festive, which you can see here: 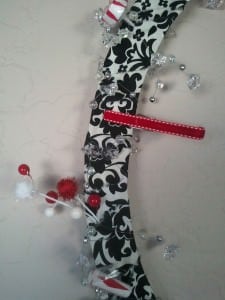 Then, after Valentines (because, frankly — I think these will be able to stick until then) I will change them out for something more spring-y… if I get around to it.  And cover some other clothespins with some more pastel-y colors. 🙂
Then, for the top I wanted it to be pretty stable, so I used some thick gauged wire, and covered it with the fabric to make a holder for it.  Then, I just hot glued a ribbon on top (it’s actually just 2 bows hot glued together).
You can see it here: 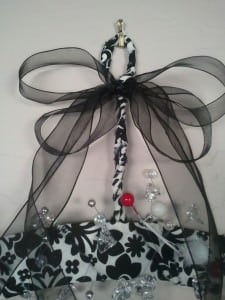 It’s SUPER big so I had better get a lot of cards… people.  Here it is with the cards we have received so far.

See, it works for weddings, and graduation announcements too.  I hate having all that stuff up on my fridge, but I love remembering all the exciting things going on in the lives of our friends.  Adorable, no?  Pretty excited to fill it up.
In other news, El Presidante has been less presidential as the winter weather comes.  He’s not doing so hot in school (just forgetting to turn stuff in, not like not understanding things) and the real cherry came when he left for school yesterday with the door wide open.  Normally, I’d come around to fix it afterwards but I was 20 miles away at work.  I had a class to attend yesterday (which was fascinating, maybe I’ll put some of the info I got from that into a blog entry)… so Drew was greeted with an open door.  I’m pretty sure he was thrilled.  Needless to say we needed an intervention after that.  When Conner got home we made him think the wii, the games and the laptop got stolen (which, frankly would probably be what they would steal first).  We even made him tell mr. Middle what’d happened.  Let’s just say there was a lot of crying, but I’m DONE.  I’m done picking up after him.  Maybe I have helicopter parented too long, but I’m giving a hands off attitude towards him now (which is surprisingly a lot more hands on, how does that happen?).  He needs to do his own life, and I need to stop picking up his pieces.  The guny bag is making a triumphant return in the morning, and currently he only has like 2 pair of pants.
Good luck El Presidante, your mom’s on your trail.
Mr Middle is chugging along.  He had a GREAT weekend and was THRILLED to tell his friends about Legoland, to “make them jealous!” … nice.  Sadly, he is also being affected by my new guny bag standards.  I hope it helps both of them.
Princess P had a haircut this AM.  It was getting too long and in her face so I chopped it off.  Not sure I love it.  Are mullets still in?  I am hoping this will spur a bit more growth as her scalp is still really visible… maybe I should’ve gone all Asian on her when she was a month old.  Oh well.  It’s just hair, right (but it is adorably curly hair!).
Drew is finishing his first class tonight for his Masters.  Pretty fantastic, if you ask me.  We’re like 10% done now.  Yay.
As for me, I just sit around and look at my cute greeting card holder. 🙂  It’s fun.
Pin
Share
Email
« Previous Post
Newer Post »