You are here: Home / Pregnancy / Being Pregnant with Twins: Double the fun & risk 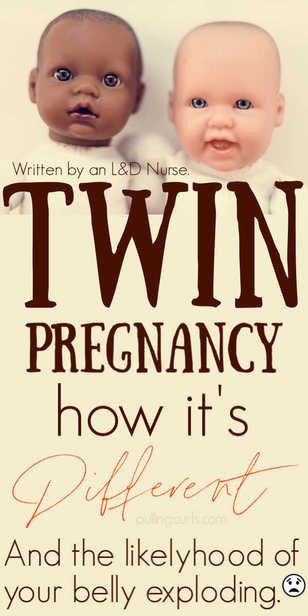 In this post we’ll talk all about being pregnant with twins. Everything from the different types, complications all the way through delivery and after baby. You’ll learn tons about a twin pregnancy!

Twins.  Two.  Double the fun.  Whether your twin pregnancy is something you hoped for, or if it’s a big surprise (and maybe not even a happy surprise) twins are a lot to take in.  You’ll get looks from strangers, with people wondering if they were natural or IVF. 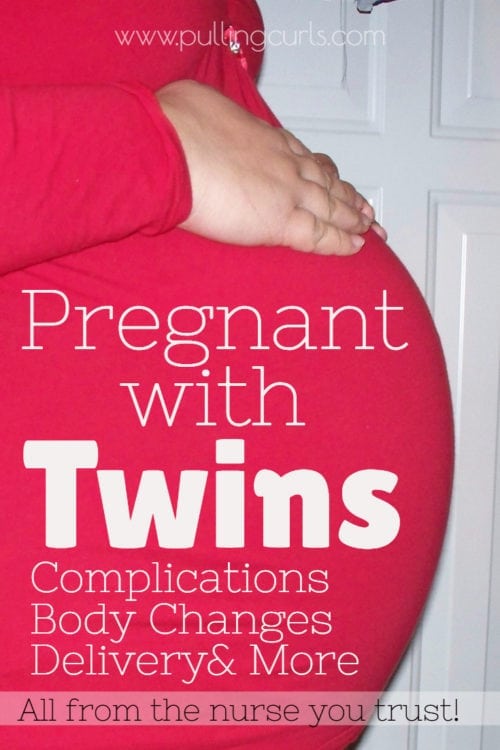 First off, there is no shame in dealing with your feelings in being pregnant with twins.  It’s a lot.  Yes, some of you IVF’d and twins were your dream pregnancy, but for someone who was just planning on one more twins can be a lot.  There is no shame in having some feelings surrounding that.

I think God gives us 9 months of pregnancy to let us sort out those feelings.  Not everyone has feelings of joy with every pregnancy.  And that, my friends, is OK.  I just wanted to put that out there as I have friends coming to me feeling SO guilty over not overjoyed.  Let this sink in.  It’s going to be amazing.  But it’s going to have to take a little getting used to.  Life just might not beisn’t how you visioned it. 🙂

But first, let me introduce myself if we haven’t met before!  Hi, I’m Hilary.  I can write this post as I’ve been a labor nurse for 15 years.  This post is going to be rich with facts about twin pregnancy, it’s coming from me as a nurse since I just attended a webinar on multiple gestation.  I also have a friend Katelyn who’s been pregnant with twins that has an awesome post about BEING the one pregnant with twins (which I haven’t).

Being Pregnant with Twins 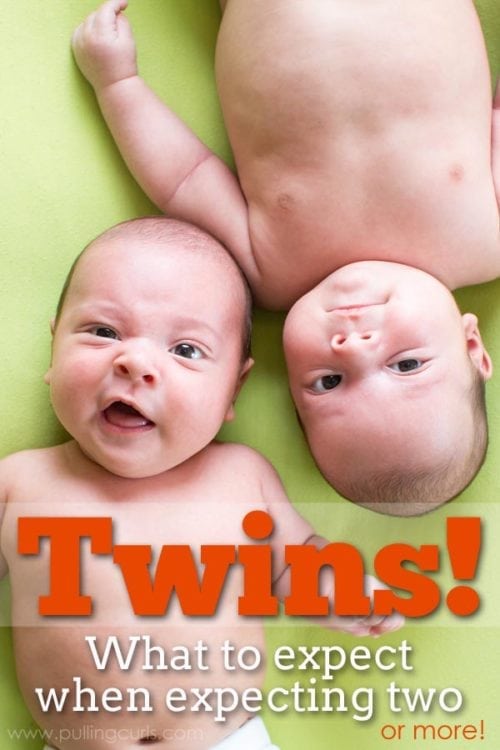 Naturally occurring twins happen in about 1 in 80 pregnancies in the US.  However, the occurrence of twins varies between countries.  Canada and south China have the lowest rates (no idea why, just thought that was interesting).

The rate of twins rose in 2013, likely due to advanced maternal age (that’s anything over 35) and the increased rate of reproductive assistance.

The cause of natural twinning is not totally understood.

The rate of multiple births (triplets and beyond) rose a lot after the 90’s, again due to advanced maternal age and reproductive aids, but after 2014 they have started to taper off after we realized how dangerous it can be to choose to have multiple gestations

Ok, back to twins.

This happens when a fertilized egg splits.  It starts as just one egg and one sperm.

Twins can be in their own sac (diamniotic), in a shared sac (monoamniotic), they can have their own placentas (dichorionic) or share one (monochorionic).  The most complicated one would be a mono-mono where they share a sac and a placenta.

The sooner the cells split into two babies the more likely you are to have separate sacs and placentas.  If it splits after 13 days you will end up with conjoined twins.

Monozygotic twins are more often females (boy babies are more fragile, so that isn’t surprising), and will always be the same gender.

They can be due to many factors including advanced maternal age, a family history, and having more than 4 children.

This happens when your body releases 2 eggs, and are fertilized by 2 different sperm.  They can be any gender.

Mirror twins — 25 % of monozygotic twins are mirror twins.  One will be left handed, one right handed, sometimes their organs are even reversed.  Not really a complication, I just think it’s interesting.  Likely happens with a later split of the egg.

Vanishing twins — would be a miscarriage of one of the twins and is most often absorbed by the body, but it can be problematic, especially the more advanced the pregnancy is.  Many more twins are conceived than born.

Twin to twin transfusion: It’s an imbalance in the blood flow between the twins — one gets more blood than the other.  This can actually be problematic for both babies.  It is graded on a scale from I to IV.  There is nothing the mom can do to prevent it.  It seems to be completely random, and mainly do to blood vessel formation.  It is often treated with complete bedrest, supplementation and massive protein intake (interesting studies on that).  Happens almost all the time when twins share the same sac and placenta.

The most common problem in a pregnancy of twins or multiples is preterm labor, with the incidence higher in those that conceived naturally vs those who used reproductive assistance. 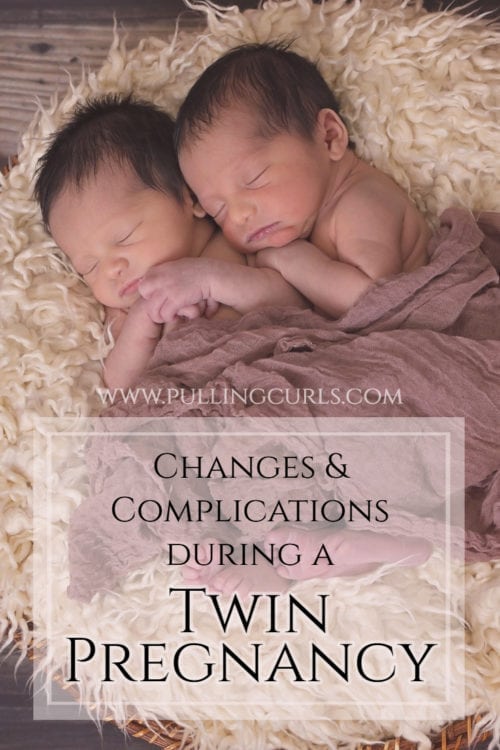 Change in your body during twin pregnancies

Your blood volume increases about another 500 cc’s with each fetus.  Most of this is plasma (or the fluid that the blood cells are in), and you will likely require more iron and folic acid.

There is an increased incidence of morning sickness (if it’s really bad, be sure to be checked for fatty liver syndrome).

There are also changes with your heart.  Your heart is pumping more blood.  With all that volume it can put more strain on your heart.  It is really important that you don’t lay flat on your back as that can squash your large blood vessels, making it even harder for all your blood to get around your body. 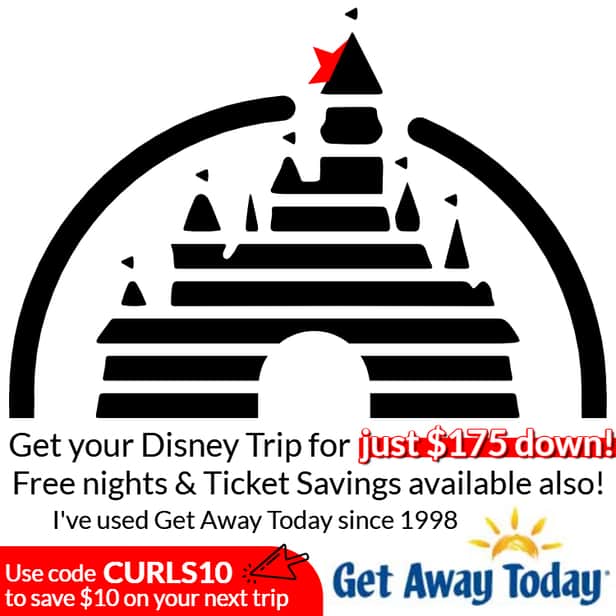 You consume more oxygen breathing for the three of you.  You’re likely to be even more short of breath than a regular pregnancy (although your rib cage will expand to allow you to bring in more air).

There are larger incidences of preeclampsia, diabetes, preterm labor, abruption or Previa (those are problems with the placenta) and at a larger risk of postpartum hemorrhage (bleeding after the baby is born)  You’re more likely to need a longer hospital stay and have more complications afterward. 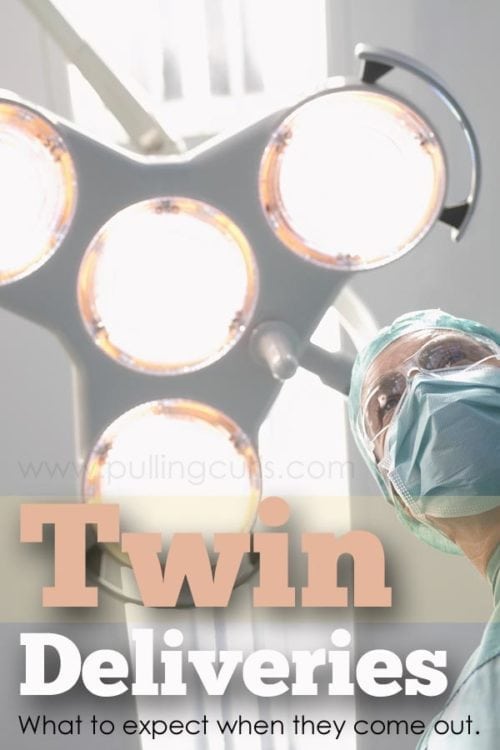 Recommendation by ACOG is to deliver twins at 37 weeks, and triplets at 35 weeks.  However, if the twins have their own placentas and sacs it is permittable to wait until 38 weeks).

The possibility of you having a vaginal birth vs a cesarean depends on many factors including baby’s positioning, placental positioning, mother’s health and any other complications.

The recommendation is to have a vaginal delivery if both twins are head down (happens just less than 50% of the time).  If one twin is breech it would be up to the practitioner, but very possible to flip the other baby once one is out.

As with a VBAC, if you really want to try to have a vaginal birth (and that’s up to you, not everyone cares).   I would choose my provider based on their willingness to perform a vaginal birth – meaning you’ll need to ask these questions early on.  Some will only do it if they are both vertex, while some even deliver the 2nd one breech if they can’t flip them (although that is less common).  It just depends on the doctor.

You do need to ask early and switch practitioners early in your pregnancy if you aren’t compatible, transferring care with twins is more difficult.

The Delivery of twins via c-section is basically similar to a regular cesarean section.  I talk about this a lot in my online prenatal class, and I do have a full post about C-sections as well.   In all the research I can find — about 75% of the time, twins are delivered C-section. 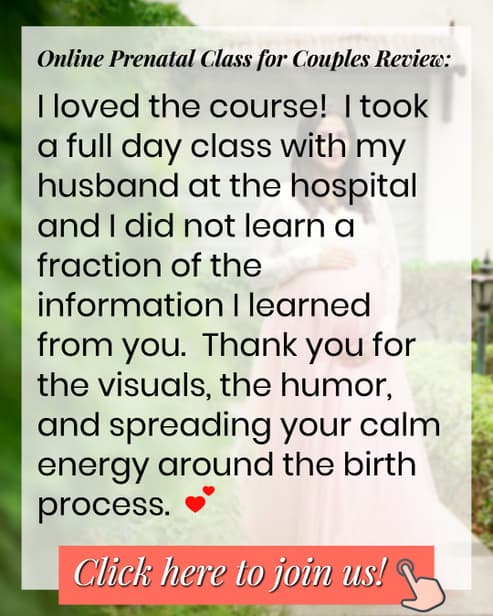 If the first twin is born vaginally, this looks very similar to a regular delivery.  Then, if the twins were to share a placenta that placenta will start to peel off, as happens with any delivery.  The second twin needs to be delivered very quickly.  If they don’t share a placenta it can still be problematic, although not as much so.

Your doctor may reach inside to flip that twin to be head down.  Sometimes they can only get an arm to come out for the 2nd one.  In that case, they would have to do a C-section, and I have seen that happen.  Also, some doctors won’t deliver the 2nd twin breech (that is why you should ask).

There are other complications that would also necessity a C-section.  Definitely, you need to trust your health practitioner in order to make an informed choice on your method of delivery.

In all likelihood, they will ask you to deliver in the operating room (even if you are delivering vaginally — as the chance of needing surgery is high).  Anesthesia should be present in the room (although you do not need to have an epidural to deliver twins), just in case of any complications.

Keep in mind that after the delivery, the doctor may need to reach inside you to flip the other baby. That can be painful without an epidural, although doable.  The good thing, at this point, is you are often distracted by your new baby #1, already in the warmer or with you.

All babies will have their own “team” of staff and equipment and there will also be a neonatologist at delivery to oversee the babies after they are out and any complications.  You may not get the quality skin to skin time right after delivery due to complications, and your need to concentrate on the delivery of the 2nd baby.

Breast is best after delivery and moms of twins, in general, have twice the milk supply of than that of a singleton.  If your babies are in the NICU (often happens due to prematurity) start pumping early and increasing your supply.

However, breastfeeding twins can be time intensive and you need to be sure that each is getting enough nutrition.  I would highly recommend seeing a lactation consultant in the hospital and making an appointment to also see them once you’re home.

Both parents (mom and dad) are at a higher incidence of having depression and anxiety after having twins — so be mindful of that as well!

Twins have been some of the happiest deliveries of my life, and also the scariest.  Make sure to stay in touch with your doctor and listen to what they have to say.  Ask questions, get answers and stay informed!

It is important that you find support if you are having twins.  Talk to other moms of twins, and express your need for help to your family.  Sometimes all you have to do is ask. 🙂

If you liked this post, be sure to sign up for my pregnancy newsletter, and check out all my other pregnancy posts below that! 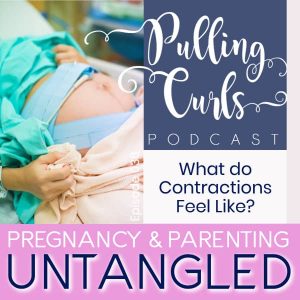 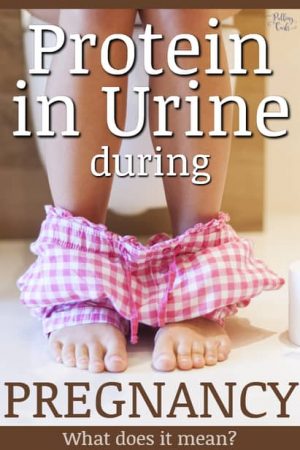 Protein In Urine While Pregnant 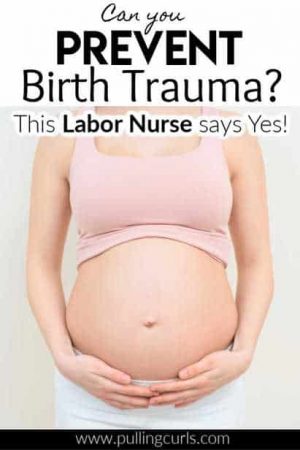 How to Prevent a Poor Birth Experience: Prenatal prevention of birth trauma 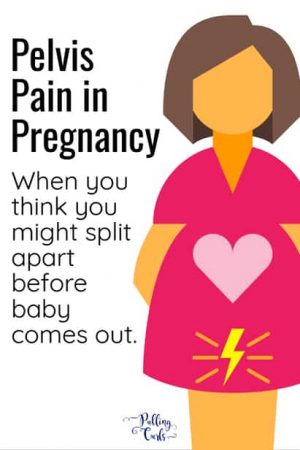 Diastasis Symphysis Pubis: When your pelvis splits during pregnancy