Sign up now!
You are here: Home / Uncategorized / Believing 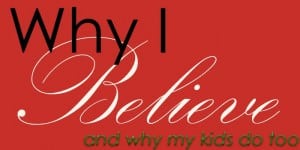 I have a hatred. Oh yes I do. I HATE it when people say there isn’t a Santa. I even hate it when kids say it. It’s not something my children will ever be told, and it’s not something I believe myself, and here’s why.

Santa is a representation of Christ in our house. I know, go on and on all you want about how something so commercial can’t be a representation of the Savior himself, but Santa is something that kids get. We also revere the Savior himself and I don’t make any notion that they are the same person or on the same level — but simply that they are similar. Child A, if he believes in Santa and he is a good little child — he will get presents. Also because Santa is getting him something he finds the good will in his heart to go out and buy/make presents for the rest of his family. He can believe in Santa, he can go visit him, we can have statuettes in the likeness of Santa throughout our home without seeming weird or disrespectful. I think it’s hard for a child to understand who Christ is. He was a man who lived a long time ago and did so many good things, he was an amazing man (and then sometimes mom gets choked-up when talking about this man — that’s kinda weird).

As we grow we realize that Christ loves us. He knows each one of us, he knows what we’ve done, he knows what we’re capable of and we know that he has showered us with more gifts then Santa and the elves could ever fit in the sleigh. We slowly build a true relationship with Christ, and although we’re not sitting in his lap we are able to talk to him, tell him our needs and then he goes to his life workshop and gives us what he thinks is best for us.

Also, in the name of Santa so many good deeds are done. I am always amazed at the charity that comes-out at this time of year. No one wants to see people (children, most especially) go without some love from Santa. Santa most definitely brings out the best in people.

So, when Conner comes to me with a realization that Santa is not real. I simply remind him that those that do not believe will not get presents from Santa. For, the faith is required for him to give us the things we desire. The simple idea that not believing could make it so he doesn’t get Santa presents (of course he’d still get stuff from us and our family, but I’m not sure he knows that) makes him re-think his little plan. I also remind him that Santa has several helpers and that most of santas we see each season are just helpers, and they do a good job at making people feel happy and carrying their wishes back to the big man himself.

I think my perspective has grown since then.  I actually see SO much unbelief in this world.  People actually have nothing to believe in.  Children, often, can’t belive in their parents or teachers or friends.  Grown adults have no beliefs in God or even a pastor.  I feel like our world is so full of unbelief it’s grown sad.

But the truth is, I now have a 13 year old boy who comes to me quite often asking if Santa is real and to please just level with him.  We have finally had the talk that in fact Santa is quite real but it may be more of a feeling or something you feel in your heart instead of a jolly old man, but if he — in fact — doesn’t believe in Santa (and I am fine if he believes in the feeling, rather then the man) he will not be getting anything.  He believes.  I ask him (P also starts all her letters with “I believe” — and there have been numerous letters).

He has a shiny new kindle fire under the tree this year.  Which, in fact, testifies of Santa.  There really is no way I would have bought him one if Santa hadn’t touched my heart.  It’s the spirit of the season that makes moms do crazy things like buy their kids their greatest desire, regardless of if they have dropped their MP3 player down a storm drain.

I love Christmas.  I love the whole idea and reason for the season.  I think a special love comes into the world that most of the world only feels at Christmas.  I am SO grateful for this.  I am grateful that people are willing to feel the Spirit of Christ at least once a season.

Because we believe.  We believe that Christ came and died for us, and if you allow him to, he will become your greatest friend.  This year, we watched Mr Kruger’s Christmas at a primary party and I do love this scene.  That baby has helped me through SO many things, and I believe in him.  I am grateful for his birth and how he helps me get through everyday life.  He will come again.  Earth will receive her king.

You can see the whole movie here.  It’s a wonderful Message about how you can make a difference during this season.