Sign up now!
You are here: Home / Uncategorized / Grateful for Spencer 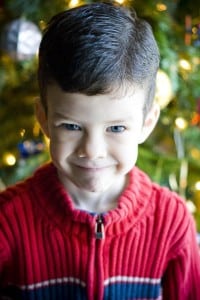 I thought I’d start with Spencer, since I most likely usually start with Conner and we all know Spencer will soon be the middle child. Poor, poor kid.
Anyway, Spencer is in the amazing imagination phase… and he is using it to its fullest extent. EVERYTHING is something, and they’re all talking to each other and doing things, and planning parties. His life is one big social event, even if he’s by himself in a room. He plays amazingly well by himself, and even better when he has a friend.
Spencer loves the little peeps. Lately I’ve been babysitting a lot and he’s been so good with the babies and the littler friends that he has come over. I rarely see him not sharing or showing them all the bad things he can do. Usually he’s so happy to have a friend he’s willing to go along with them, and play nice.
He is really into coloring, playdough, little figures (literally, any little thing he loves to make them be in situations and do stuff), preschool and “being in a tie” with Conner. Yesterday he ended-up with the same preschool teacher that Conner had and he was SO happy that he could say he was the same as Conner…
I can’t imagine what my day would be like without him, and I never want him to change. He’s the one I worry about most with this baby but I’m excited to see what a good big brother he’ll be. Thanks for always being my buddy Mr. Spencer.
Pin
Share
Email
« Previous Post
Newer Post »