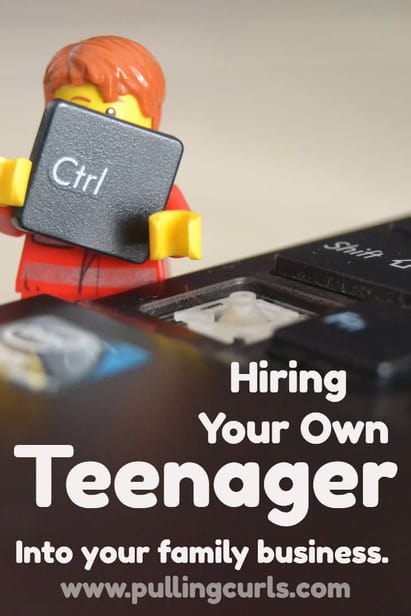 In this post: We’ll discuss the pros and cons for hiring your own kids in business. How I did it and things I wish I’d do better at (and things that worked out great).

Somehow my blog went from my favorite hobby to my favorite business.  Sort of all in one fail swoop.  One month I was making a hundred and then I blinked and was turning this into my full-time income.  I couldn’t believe how it happened but I started to mull over hiring a VA to help me out.  Then I saw that I had a 16 year old boy who was interested in computers, graphic design and I could really be a stepping stone into him having his own dream job. 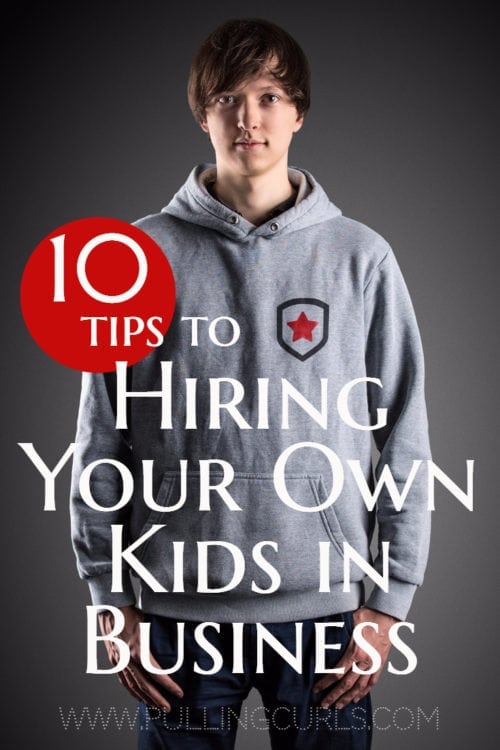 But, he’s flaky.  There, I said it.  He wouldn’t be my dream employee, if I was visualizing one.  Also, he’s a 16 year old boy.  We just don’t get along well all the time.  We’re a lot alike and while I have really turned around my ability to let balls drop, he’s juggling and then seeing something shiny and leaving balls all over the place some days. #squirrel

He’s also amazingly smart.  I knew that the learning curve would be steep, but he has an eye for design, color and what will grab people’s attention.  He can be a really hard worker and he LOVES working on the computer.

Could I turn those skills into something amazing where I could funnel my business’s money into our family vs another person’s family.

And I fired him, and I hired him back.

It’s been a bit of a rough road, but we’re to the point that I think we’ve figured it out.

Here’s 10 tips for hiring your own kids in business:

But, like I said we’ve had a few rough bumps.  Sometimes he doesn’t want to design when I could really use it.  I have just decided to swallow my pride and do the stuff myself.  In reality he’s not taking giant loads of work off my plate (the majority of the time).  But, he’s learning skills and I am able to pay him when he works (and freeing up my time to do other things). I think the system will fine tune into something that really works well for both of us!

So, have you hired your own child in your family business?  What would you change or work on?  Any failures or sucesses to share?

If you liked this post, be sure to sign up for my MomHacker newsletter.  And check out all my other parenting posts beolw that!
>
[pt_view id=”a38f28df64″]