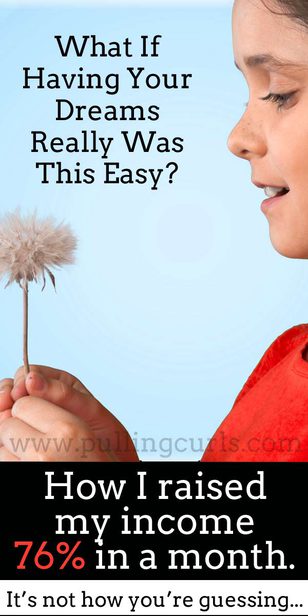 OH man, that title.  I feel like a used car salesman.

Well, I just about died.

But I knew that there was a reason behind it.  And today I want to share that with you.

First off, let’s go back in time a bit.

My husband was a teacher until about a year ago when he just couldn’t do it anymore.  The 80 hour workweeks for a job that was actually part time (seriously) was just too much.  He never saw our kids, he rarely helped at home and he was SO stressed out and was not enjoying it.  So, he left.

We had no idea what the plan was, other than finding a new plan and trying not to get divorced in the process.

And for a few months we floundered.  No so much financially, but emotionally.  Just kind of wondering what the plan was.

We were starting to get our legs under us and starting this year we have found a way to support ourselves.  It’s going well but like many sources of income it could easily drop at any time….

It’s kind of scary.  BUT I also realize that income can certainly go up and down even if you have a “steady job” like teaching.

SO, I learned about this class.  It’s by Carol Tuttle who also does “Dressing Your Truth”.  I was intrigued.  I really like talking to Carol.  I think she has a lot of insight and good ideas.  I thought this might be helpful to us as we were finding our financial footing.

The class is called SoulPrint Healing (but has now been changed to the “money cure”).  I know, that name sounded a little “out there” for me….

Here’s the subtitle on the sales page:

Now THAT does sound like something I wanted.  What about you?

Especially the Affluence part.  We also desperately needed a dose of happiness and purpose.

But, back to me.  Do you ever notice that you are PURPOSELY dwelling on the negative.  Something about it is like a snag in your nail.  Keeps catching on things and drawing you back to it.  You sort of know if you could just get your mind on something else you’d be able to move on better.

Well, I felt like a lot of my life was like a snag on your nail.  I would get snagged by things, dwell on them and take what was actually a pretty great day, and turn it into a miserable one.

And THAT, my friends was something I wanted to work on.  I needed some tools and ideas to get me out of that zone.  I didn’t like being there.  At all.

So, we dove into the class.  There is a couple of hours each week to work on your thoughts, your mind and your lifestyle.

Slowly I started to realize I had some serious feelings about money — which I wrote about in this post called I Love Money.

But as we got further into the class I found that my main problem is remaining positive.  I have been a 100% the glass is half empty girl.  In fact, I was pretty sure the glass was made of very thin material would just burst at any minute and milk would be everywhere.  Then, everyone would leave and I would have to clean it up.

That’s who I was.

And that is what was coming into my life.  A lot of glass half empty things.

And I slowly am.  I catch myself thinking things are going to fall apart every now and then, and I literally say out loud:

” I am excited for the future of my business.  Money freely flows to me.  Money and I have fun together.”

Which, sounds really lame if you were to walk up on me saying it (as my kids did – and my kids did think I was insane).

But, then came my May income and it was up SEVENTY-SIX percent.  It is literally our highest grossing month as a family, ever.  EVER.

Yes, much of that was from this or that, one thing or another.  I could certainly rationalize that it was a one time wonder and we were just lucky (which we are, thank goodness).

But it IS up.  We have plenty of money for the things we need.  I do believe that we will continue to have that money as long as we stay positive and excited for what the future holds.

And THAT type of attitude (which is the antitheses of all I have held dear) is what I learned in this class.

I really think it’s the reason for the income jump.

And it’s the reason I don’t cry when I think about our future anymore.

It’s also why I’m not going to cry if next month’s isn’t as high.  I truly believe that God is going to give us what we need.

She has a totally free masterclass coming up, as well as a webinar.  There are a lot of free tools you can use.  But I actually REALLY recommend the full course.

I know it seems dumb to spend that type of money (when you compare it to other financial classes, this one is awfully well-priced) when you need money, but I really think it will be worth it.

We have come out of it in a world of rainbows and unicorns. Maybe not every day but every SINGLE facet of our lives is better after it.

And I really don’t say that lightly.  I spend 2 hours/week for twelve weeks doing it with my husband and it has REALLY helped.