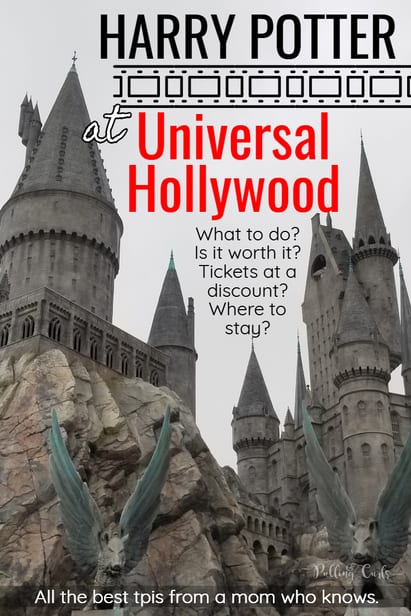 The Wizarding World of Harry Potter is truly the BEST reason to go to Universal Studios Hollywood.  BUT, some advanced preparation will leave you a Quidditch field ahead of everyone else!  We’ll talk wands, rides, butterbeer and more! 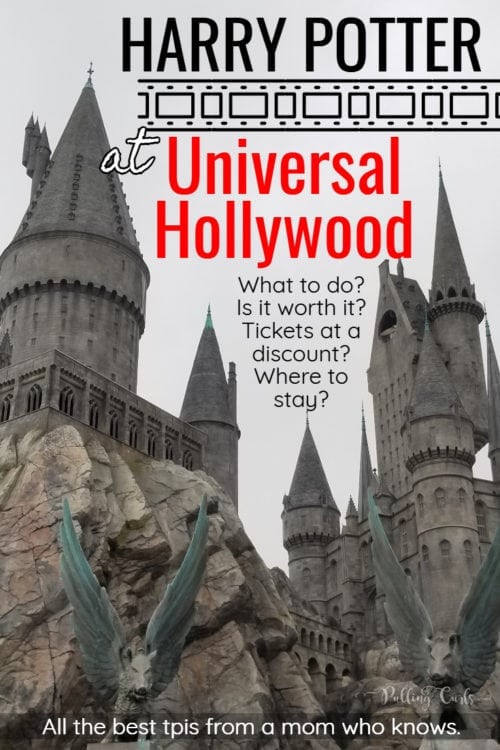 So, when I announced a trip to Universal Studios Hollywood, you can only imagine that I had be catapulted into motherhood stardom.  We were all super jazzed, but that child literally found his golden ticket.  He was SO excited. {in full disclosure I was given a portion of our tickets for free — and you can read about the rest of my Universal Studios Tips & Tricks for Families}

My little Charlie Bucket was touring the factory. #livingthedream

But, I wanted a bit of info about the land before we headed out and I had some serious issues finding out information about families, what rides were good for my smallest child or how I should navigate the day.

So, in this post I plan to share with you the ins and outs of Harry Potter in Hollywood.  Be prepared for lots of nitty gritty tips.  I hope lots of moms find this post helpful!

If you’re looking for Universal Tickets, be sure to check out the awesome Discounts at Get Away Today — and save $10 off your purchase using coupon code CURLS10  They also sell tickets separately at a great price!  You can also get combo tickets with Disneyland for a great price!

First of all, I have to say it does NOT disappoint.  You really feel like you’re in Hogsmead and Hogwarts looks completely amazing. Waits for the wand shop are MUCH shorter in the afternoon — so if you just want to see what it’s like, you can wait till’ the afternoon to visit the shop.

The wand is pretty nice.  But wow, 50 bucks for one day of waiving fun.  They have about 10 areas in Hogsmeade that you can perform the spells.  They do come in a nice box (I was somewhat worried the kids would have to stick them in their backpack and they’d break).  The wands themselves are well made.  They don’t look like some cheap plastic wand, so that’s nice too.

The spells are somewhat difficult to perform and there are wizards wandering around to help kids out with spells when they can’t get it.   I find the key to be finding the camera that records your movements (you’ll know it when you see it – in the picture below it’s the gold thing right above his hand), making the movements smaller than you envision.  Also, the words don’t matter, but I chose to yell at my kids and tell them it wasn’t working because they weren’t saying the spell. #funmom In the end I had 2 kids who bought wands. Yes, they are excessive and insane, but I actually increased everyone’s allowance the week beforehand so they’d have some money for our trip.  The Harry Potter fanatic knew 100% that he wanted one.  I would agree with him, that if your child loves Harry Potter this would completely be worth it.  If they aren’t I would just try to slide on by the wand shop and just enjoy the Hogsmeade atmosphere and the rides….

There are are two rides in this area:

Flight of The Hippogryph

This is a “kiddie coaster” that is still pretty fun and enjoyable.  You get to bow to Buckbeak on your way and also see Hagrid’s hut while you are in line.  Great for all ages, not a big drop.  Everyone in my family enjoyed this place.  The line for this one isn’t usually too long.  Maybe 20 minutes midday.

Harry Potter and the Forbidden Journey

This ride is amazing. It’s new and different, but I ended up with some mom guilt for hauling my 7-year-old on it. Wait time for this one can head to an hour mid-day. Let’s talk more about it….

They have an area for your bags, the lockers are free for 90 minutes (plenty of time to be on the ride).  I had a pretty large backpack and it still fit pretty well with a little shoving.  The boys also got lockers of their own for their wands.  The lockers use your fingerprint to enter and exit them.  It’s a pretty cool system (although, remember which finger you used). The line for the Forbidden Journey winds through Hogwarts.

The line (which can be quite lengthy) winds through Hogwarts.  There’s talking photos (including the Vicar of Dibley), Dumbledore’s office, and fun magical scenes from the movies.  The line moves pretty quickly and the queue is one of the best I’ve ever seen.

You used to wear 3D glasses, but now there are no glasses.  You ride in seats that move you in motion with the movie that you see on the screen.  The seat straps you in with an over-the-head harness and your feet are free.  It shakes you around quite a bit, and while I do NOT get motion-sickness, I did feel a bit sick to my stomach when I rode this ride.

BTW, I have tips for motion sickness in my original Universal Tips posts. The ride does not flip you upside down (although at one point your head is a bit lower than your bum), but it does shake you side to side and you do go on your back.  BUT, I think my motion sickness was probably due to the movement plus the movies.  It’s all VERY real.

But, the mom guilt – well, the ride was fine until the Dementors come after you.  And that, I think, is where she started to cry.  Sure, there are lots of 7-year-olds who wouldn’t be bugged by this, but my unicorn and rainbow lover just got scared by it all.  Update:  We took her when she was 7 and had watched most of the movies and read a few of the books and she really enjoyed it.

Universal does have an amazing ride swap for parents who have children too young/scared for rides.  You get to wait in a themed room while your group rides and then you can switch off.

However, everyone was so excited to go on the ride I’m not sure I would have stopped her.  She was excited to go on it, so it is what it is.  She isn’t scarred, she just didn’t want to go on it again.  Here we are a week later and she says she’s sort of glad she went on it. Just another bit that we couldn’t pass up.  Butterbeer is in every book, and it always sounded so delicious.  All of us wanted the frozen variety.  It was delicious.  Somewhat of a combination of cream soda and butterscotch.  It’s topped by a loose whipped cream.  It is delicious.  They don’t have the price posted, but I’m pretty sure it’s around six bucks/person for the frozen kind (not sure if the liquid kind is cheaper).  BTW, it’s cheaper in the carts than at the 3 broomsticks (which I talked about in my original Universal Hacks post)

Update:  On our last trip, some got the non-frozen variety, and that cup is filled pretty full and is EASILY spilled if you want to stir the cream in, so watch that.  We also took our butterbeer on the tram movie ride and it was a great treat while we enjoyed that ride. 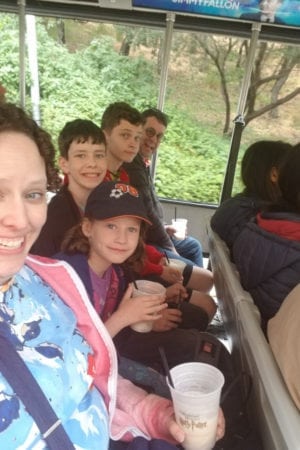 Yes, it’s pricey. Don’t come here if you don’t want to spend any money.  But if you’re looking to make some kid’s dreams come true, this was money well spent. There’s also tons of other shopping in Hogsmeade (you find that as a theme through much of Universal, the amount of shopping is crazy!).  The kids really liked Zonko’s joke shop and Honeydukes sweet shop (although thankfully, no kid fell in love with anything at either of these stores – they are both quite small). They do also have a lovely robes shop where you can buy robes and scarves and other House paraphernalia – ties, sweater, pins, headbands, school supplies, etc.

However, if your kid wants a robe they are SO much cheaper outside the park.  My son brought his robe (which we found at Goodwill for 5 bucks) with him and really enjoyed wearing it in the park.

They do have some performances during the day.  We caught a bit of the Frog Chorus as well as the Tri-Wizard Tournament.  They were fun for a few minutes, but even the vigilant Harry Potter fan wanted to move on after a while. All in all, we loved Harry Potter land (the full name is Wizarding World of Harry Potter), it was fun and lived up to lots of expectations from a kid who had raised this particular land on par with heaven.

I do believe this land has saved Universal Studios.  It made the day.  It was fun, exciting and well done.

As for how to run your day I’d recommend going to get your wand first thing (if that is SUPER important to you).  That line gets long, almost as long as anywhere else in Harry Potter.  Then, I’d head out to the Forbidden Journey.  I would certainly head to Harry Potter first if you make it to the park early.  But, we also went back later in the day (with about an hour left) and we could have ridden Harry Potter all night.

If you’re looking for Universal Tickets, be sure to check out the awesome Discounts at Get Away Today — and save $10 off your purchase using coupon code CURLS10

If you liked this post, be sure to check out all my Universal Studios Hollywood Tips and Tricks for Families, sign-up for my #1 tip for family travel, and check out all my other travel posts below that! This post was originally written in 2016 but has been updated.