Sign up now!
You are here: Home / Parenting & Family / Mormon / How to Find Hope

We went to Utah over our fall break.  Yes, I have family there, but it was mainly for my husband to interview at a company he was really hopeful for. 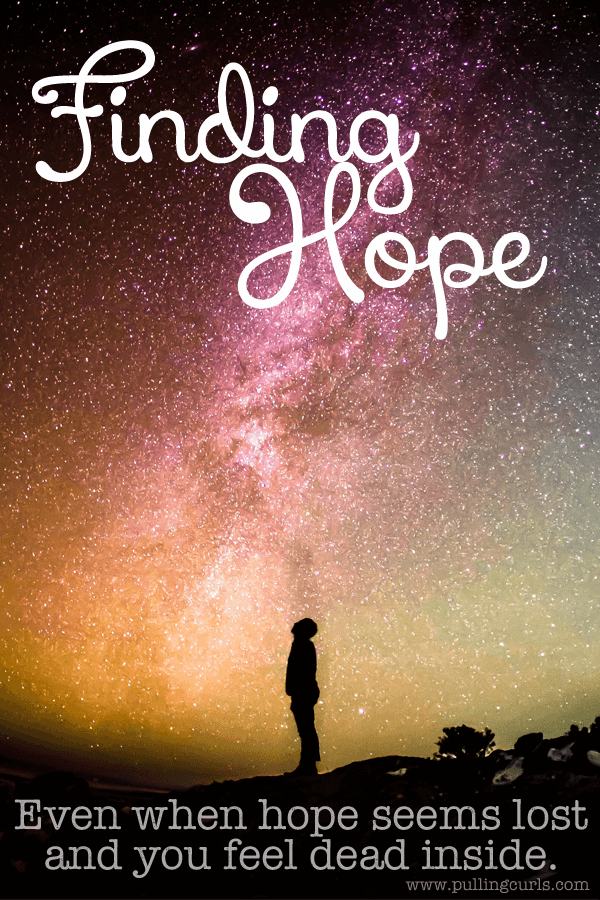 We had such a nice time, but one of my favorite things we did was climb “Y mountain”.

Utah has this thing about putting your school’s “letter” on the mountain behind the school.

Do other places do that?  I mean, mountains are fairly available in Utah — but I digress.

So, it’s pretty high up on the hill and there is a trail to it and I felt like we were all old enough to go and not have any tears.

Oh, there were tears, but it was me.

The hike to the Y has 10 switchbacks.  You’d think the switchbacks would make it easier, but they’re still REALLY steep!

I threw up on turn 4.  It’s SO uphill and I hadn’t been working out for so long.  I was miserable.  My husband was so good to me.  He waited and he said I could do it. 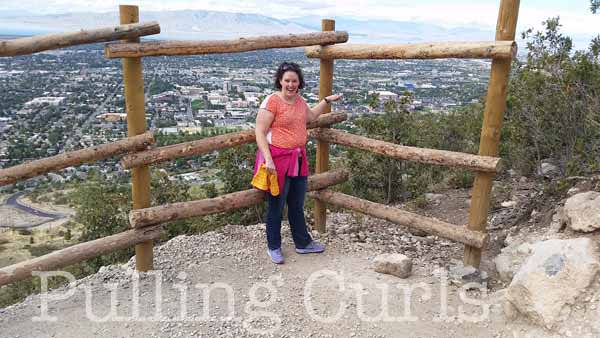 I was pretty sure I couldn’t do it.

The last switchback, my husband and my middle son wanted to walk to the top of it so they did an extra switch back.  I was more than proud to have made it to the bottom of the letter.  I went with my oldest son and daughter along the path to the Y.  They were horrible to me, with Princess P screaming “MOM, are you gonna VOMIT again?” every few minutes.  I didn’t, but I wanted to collapse and call a helicopter to get me off the mountain.

During the journey there are AMAZING views of my hometown and BYU where I attended school.  It was hard to really enjoy them as I knew I had further to go.

I really am from a beautiful place.

Panoramic view from the top

Finally, we made it to the Y and I sat down.  I considered what items I had in my backpack that I could stab myself with instead of continuing my journey down the mountain.

The Y is pretty big. 🙂  Yes, my husband and son are those specs in the distance.

Then, these people from New Zealand/Australia came up.  They were similarly dead thinking “WHY DID WE DO THAT?” when they got there.  They saw El Presidante’s hat and said “OH MY GOSH, WHERE DID YOU GET A BAND HAT???”

They went on to share that they were from New Zealand and had made the trek to Utah to go to General Conference.  They were SO excited about everything.  SO excited about Salt Lake and seeing all the church history.  They had gone down to BYU and watched the game on Friday. That was their first US football game that they had ever attended.  They were blown AWAY by the band. “It’s just like in that movie ‘Drumline'” — I was like, “yeah, it is!” — that may have been the first time I had a conversation with a normal human that was more excited about band than I was. 🙂  They were SO excited to see things that they had heard about their whole life, paid tithing for and probably never thought they’d actually see it all. 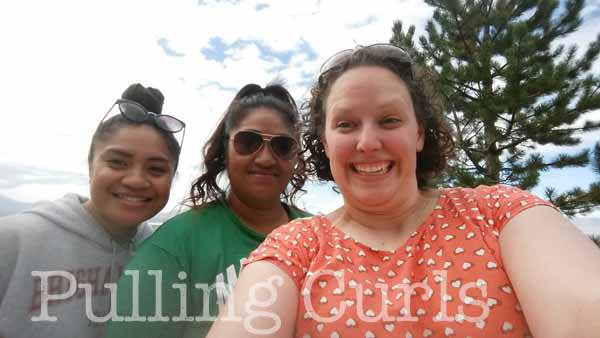 My new friends from down under.

Suddenly, the fact that my legs couldn’t hold my body weight up any longer washed away.  These people thought things that I take for granted all the time were AMAZING. They were so excited.  They were talking to El Presidante about what it’s like to be in band and then he told them that both me and my husband were In the band and they went crazy.  They told us how lucky we were and how fun that must be.  And suddenly, I remember that it was fun.  While there were hours out on the hot blacktop it was also SO fun.  So many good friends and memories.

Like we had planned it, sounds of the drumline wafted up towards us from the Homecoming Devotional…. 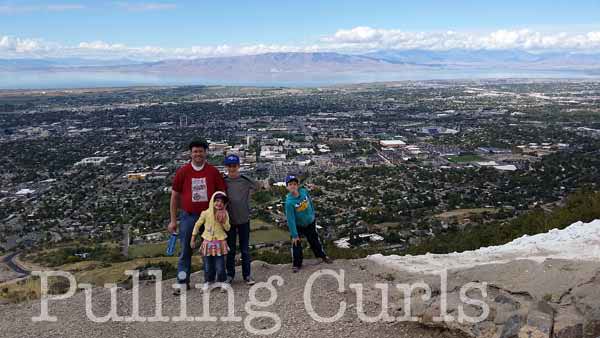 We all made it! I’m surprised this picture isn’t blurry my legs were still shaking….

Suddenly, the trip down the hill wasn’t so bad.  Because I had an amazing life, and I was so lucky.  A huge U-turn from how I had felt on turn 4 a few hours prior.

Fast forward, Drew interviewed and was hopeful, but he didn’t end-up getting the job.

I was crushed.  I really felt like that was the one for us and it was going to work out.

Then it was time to pull myself up by my bootstraps and move on.

The problem is, I was dead inside.  I thought it would go away, but it didn’t.  I prayed, and apologized for being so angry.  I knew God had a plan for us and we’d be ok.  {Crickets} 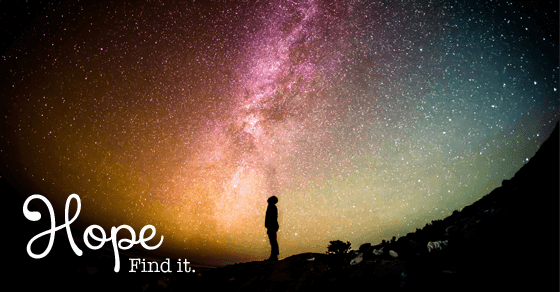 At the least through this whole journey, I have always had a really strong feeling that things would work out and be ok.

That was gone, I was left dead inside.

After a couple of weeks it wasn’t changing and I was turning dead.  I wanted to just crawl in bed and cry most of the time.

Problem: I have kids, a job and a life to live.

I finally messaged a few good friends to ask them “WHAT THE HECK”  I was starting to doubt every choice I’d ever made.  Had my receptors been off?  Were we not supposed to move here and spend thousands on this masters degree?  Why did we leave California?  I was just tired, and sad, and lost.  A good friend just told me to find some hope.  Even just to hope to have hope.

So, that’s what I did.  When I wanted to scream that I was dead inside, instead the voice in my head said “I hope to feel something at some point.”  I also made the decision to start to look more at the good than the bad.  I had been staring at the rain instead of the rainbows. 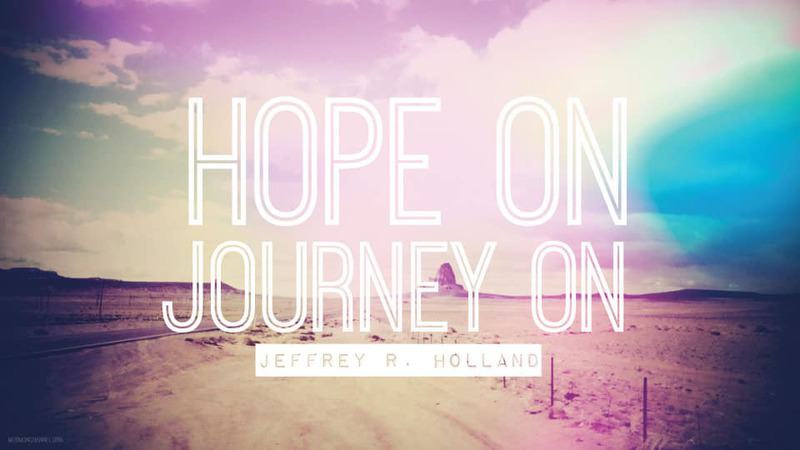 That has started to melt me.  I still don’t feel much when I pray, but I feel a little light.  And I hope it gets a little brighter.

I hope God has a plan for me, that he cares for me and that things will turn around at some point.

Until then we are so blessed to be making money with this blog, and some combined part time jobs to even land us a few bucks in the savings account every month.

Because life is about the rainbows, not just the rain.

Because life is realizing how blessed you are, not just vomiting on turn 4.

You just have to get past turn 4.

Here we are on the top of Y mountain a couple of weeks ago. Yes, the hike was so hard I threw up on the way, but the view and perspective was worth it. Wondering when our own personal hike will give us some perspective.:) #ymountain #riseallloyalcougars #provo #vomit