Sign up now!
You are here: Home / Uncategorized / I Feel Her Pain

Did you guys see this story? It’s the one where the kids calls a school adminstrator’s home and leaves a message asking them to cancel school for a snow day. The wife calls the kid back and FA-REAKS out on him with a 6 minute message.
A) Wife was dumb.
B) Kid was dumb.
But I feel the wife’s pain. OH, do I feel her pain. I can NOT BELIEVE how many students we have calling the house, at all hours. We’ve had calls before 7 am and well into the hours when I am usually sleeping. Are these kids dying? Has someone close to them died? No, they’re just wondernig about a concert. Something like that.
Now I’d like to also say that Drew has a slew of parents who really help him out, but they’ve gone out of their way to help out our family, and I’m fine if they call. They are very considerate and they’re usually helping out, which I appreciate (obviously).
But, it’s the kid that calls at 9:30 the night before a parade saying they dont’ have a ride to school that just gets me. I would NEVER call C’s teacher at home. I guess I could see situations where I might. Like, if he were in the hospital, or if Drew died or something like that. Serious situations.
But teachers have phones at school, they have email. I have plenty of ways to contact her if I have an issue. And I do (oh, believe me I do). Also, I think kids think Drew’s cell phone is paid for by the school distric. It’s not. Period. Ever. We pay it and I swear 90% of our minutes goes to band stuff. BUT, is it tax deductible? I think not (but seriously, if it is — someone email me, that doesn’t really seem fair).
And yes, feel free to reference this blog post in your next Booster meeting. 🙂 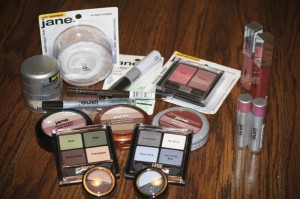 In other news, I am addicted to Jane cosmetics now. I LOVED their powder. I think it’s just as good as the Bare Escentuals I bought a few months ago (and then returned because I felt it was overpriced). I think out of pocket I have spent somewhere near 10 dollars, and what have I gotten in return? Powder, shimmering powder, 2 pots of eyeshadow, 2 eyeshadow combos, 1 eyliner, 1 eye crayon (?), 2 lip glosses, 2 chapstick type things, 2 blushes, bronzer, and mascara. I think that’s all. 🙂
Stop me.
I mean it.
By popular demand I’ve posted a picture. Feel free to tell me what an AMAZING shopper I am — and yes, all for just about 10 bucks.