January income has been my best month ever.  Let’s jump into the numbers: 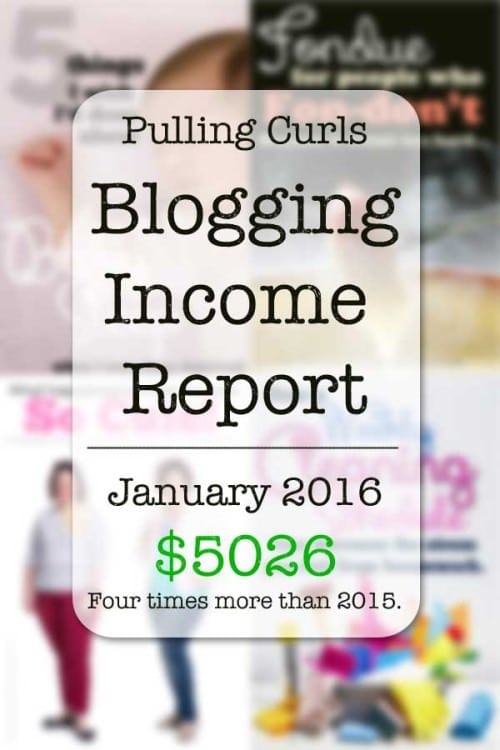 I finally hit the 300k pageview mark.  I was really surprised it happened this quickly.  I wasn’t hoping to hit it until March (that’s my March pageview goal).  Look at me, totally ahead of the game!

Ads were way down.  For several reason.  1)  It’s a new quarter and advertising people are just setting up budgets.  2)  I changed to MediaVine and it takes a while to get set up with a new ad company.  I was glad I did this in January when income was going to be poor no matter what.

I sold myself.  Just kidding.  This includes my book, prenatal class (just barely available — and I am accepting affiliates) and my spreadsheet.  Happy with this number.  I really want to hit 1k/month on this by the end of the year.

Woot-woot the January affiliate train.  I did really well with a couple of my affiliates.  And, of course, I just got an email saying that they are going to change the programs starting now.  However, I did have a friend help me with some affiliate links in my hospital post and it has SKYROCKETED my Amazon income.  I’m typing this on the 4th and I’m already up to 100 bucks which is WAY higher than I usually am.  Woot-woot!

Woot-woot, my best month ever.  Mainly assisted by awesome affiliate income.  I hope I can beat it every other month this year now!

That mean, in total (between all my income streams) I make 20 bucks for every 1k people that visit my site

Dismal ad income.  C’est la vie.  I’m excited to see how Media Vine Improves.  I will say that my site runs SO much better now.  That’s the main reason I switched.  Too many ads was just making my site slow and broken.  I’m excited to be with Media Vine.

NOTE:  MediaVine has a LOT less ads than my former network.  The idea is that they sell the space for more and I hope to make somewhat similar to what I was making.  BUT I do not plan on making AS much.  I hope to build trust and followers by having a clean sight.  The eye is on the final prize, not just on ad income for me.

As a reminder, I get all these awesome numbers and calculations from my Blogging Income Spreadsheet.  It comes with a 6 day course on how to set it up, and I even just added a google hangout that shares with people how to set it up for themselves (and how I adjusted mine for my new ad networks).  Even if you don’t want to spend the money, you could probably get some ideas on how to set it up on your own.  BUT, for 20 bucks with all the formulas already in there.  Well, THAT is good math. 🙂

I have started only taking 90% of the blog earnings as income.  I set-up an LLC last month and I am mulling over being taxed as an S-corp.

I didn’t go to business school, so a lot of this is annoyingly blech.

BUT, you’ve gotta love that income number.  I’m really proud of all my hard work and so thankful for each and every visitor to my site.