Sign up now!
You are here: Home / Uncategorized / Lessons from the Couch

The new couch has been here about a week, but last Friday night we hauled our old furniture out.  I actually couldn’t even be in the room to witness it…  I was sad. 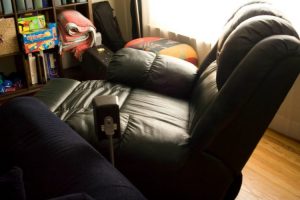 Not the couch, that one I was happy to see go but along with it went the recliner we bought when Conner was born.  I’ve rocked each of my little tykes in that thing, fresh, home from the hospital, sleep-deprived rocking.  I started having second thoughts, could I deal with it being gone.  It was kind of a symbol that era of my life was also leaving.  I was really sad.  This isn’t to say that recliner was in tip-top shape.  I was pretty sure the seams were going to burst soon… It was just as ready to head out as the couch.
Flash forward to the next day when I sit on the new couch, and I ADORE it.  IT’s so soft and plus, I love the courderoy feeling of it.  I’m so glad we got it.  We can all sit comfortably on it, even me who can’t sit up straight.
I know, I’ve whined about it before but 2 of my BFF’s have left me in the last month (one is leaving next week — we’re throwing her a party tomorrow)… I coudln’t even think about it.  What would I DO?  How would my life CHANGE?  That’s an era that’s leaving.  It’s true.  It is awfully sad to think about.
But, as I sat on that delicious new couch I realized that each era is delicious.  That doesn’t mean every single MINUTE is delicious but the era in general is great.  I will love what comes.  I will make new friends and the beauty is that they are still my friends, even if far away.

In other news, the salvation army picked up our couches this morning.  Not even a nibble on Craig’s List, word to the wise, we’ll get a nice tax deduction off those two. 🙂  And the memories can stay right. here.