I don’t make a secret that having a newborn really beat the crap out of me.  I had some fairly serious anxiety for MONTHS after I had princess P.  I have no idea if it’s hormonal or whatnot, but I know that a large part of it is the lack of sleep.

Back in 2000 when I had my first baby (yes, I am a dinosaur) the big sleep book out was “Babywise” and I really clung to it.  It was something that showed me there could be some semblence of a schedule.  I flounder when I’m without a schedule and Babywise really worked for me.  On the first one I followed it fairly strictly and it slowly loosened up with each child, but this is what I wish I would’ve done for baby sleep patterns.

Here are a few things I wish I would’ve done:

1.  I love the feed, play, sleep cycle.  That is the foundation of Babywise for me.  At least, what it bubbled down to, by baby #3.  The baby wakes up, you feed them, they play and then you put them down for a nap.  The whole day works in those cycles.  I think my kids appreciated knowing what was coming next and I appreciated having a routine.  I also was grateful that I was never the mom who would put them in the crib and tiptoe out.

2.  I wish I could have dropped the balls around me more, and I wish I could have been a better napper.  I would get rushes of anxiety after I napped during the day, which would make my problems even worse — so I made the choice to only get my sleep at night and just try to stay active during the day.  I guess maybe I wish I had gone on drugs for it.  I also couldn’t stop my cleaning routine.  I felt compelled to keep up the routine even when I was basically a zombie.  I have been using Brain.fm to kind of help me turn my brain off to sleep lately.  I think it would’ve helped back in the baby days.  Maybe?  I also think Owlet would’ve helped a lot.  Anxiety always hangs in my back pocket after a new baby. I think a lot of my baby anxiety could’ve been cured with Owlet Baby Care – check out my post about it!

3.  I wish I would’ve picked them up more, and worried about their long term sleep patterns less.  Babywise makes it SO important that your kid is getting great sleep.  When in reality I maybe just needed to cuddle that baby a little more.  However, my babies are not particularly cuddly and I am NOT much of a baby wearer (although I did love my Ergo pack).  I will say that all my babies were VERY happy, and I think that comes from #1 and getting good sleep.  But every now and then they maybe needed a cuddle I didn’t give.

5.  I wish I would’ve owned my own Otoscope and learned how to use it back then.  My oldest had horrible ear infections which made him a poor sleeper and I never knew if it was the infections or him just being a horrible sleeper.  I will say I often just turned up the Enya and had a 10 minute cat nap while he whimpered and I don’t think there’s any shame in that.

A lot of friends say the secret to great baby sleep is this or this.  What’s your favorite thing to help a baby sleep — tell me in the comments!

Sometimes a baby will only sleep if being held — I really liked this article, all about babies who have to be held — some great tips in there!

The reality is that you’re trying to bend to another person.  And you can’t always do that because you are STILL a person.  You have to make it work for both of you.  I’m sure a lot of moms can’t believe I let babies cry it out.  And I did, and I also would pick up.  I just wish I hadn’t stressed so much about it.  I do think there are moms who don’t stress ENOUGH About it, but I went the other way.  What a surprise. 🙂

Hang in there, new moms.  I promise that if you keep up good routines and lots of love they WILL sleep someday.  And then they’ll be out late like my 15 year old and you won’t sleep again.  Actually, on second thought, kiss sleep goodbye, totally overrated. 🙂

If you liked this post, be sure to check out all my pregnancy posts, including newborn care:

And my postpartum posts: 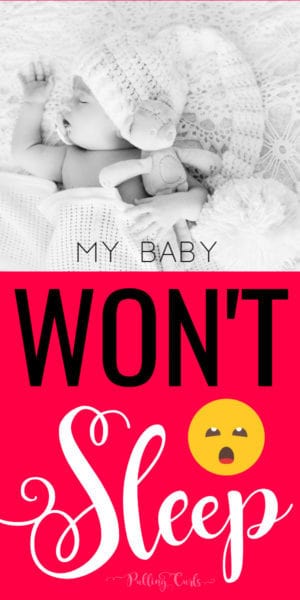