Sign up now!
You are here: Home / Uncategorized / Photo Friday: Part of the Band

Well, we are ALL parts of bands, bands of brothers, bands of families, if you will.  Someone in particular is REALLY a part of the band though, and I got to go see their homecoming parade last year.  What other band directors do you see hauling a stroller.  The parents all found it SO amusing.  Little do they know that Drew has often had a stroller with him during a parade… just not in the past FEW years.  Love that guy, and guess what — the band is doing GREAT this year.  They got a first place trophy last competition.  Go Drew!  BTW, I hate to mention it, but I think Miss P may have gotten a few more cheers than her father.  But let’s face it, that girl in that hat…. well, who would you cheer for? 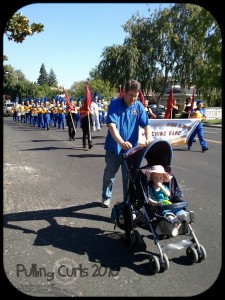 A littler someone is in a band of first graders.  He’s doing such a great job he even got an award this last week.  Sadly, I wanted to zoom in so I didn’t have a ton of little faces to blur out — don’t worry, the real picture isn’t near as hideous.  Look how enamored he is with himself.  His award was for mathematics and teamwork.  I mean, seriously — the kid could totally work for Apple, Facebook… the possibilites are limit here in the land of silicon with those types of skills.  His future’s so bright, he should probably find his sunglasses… I know they’re around here somewhere…. 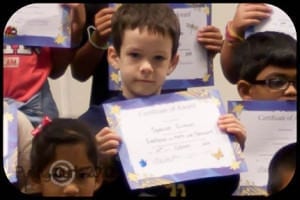 This wee one is taking my personal band and stretching it to the limit.  We’re going to see our friendly pediatrician today as sleep has been limited at night, and somewhat during the day.  Isn’t it awful when you hope there’s something wrong that they can fix.  If not, I see the kids sleeping in a tent in the playroom this weekend and our fan being on.  The girl is ruthless, I tell you.  It’s hard not to adore this face in the morning though.  I swear, if anyone else did this to me I’d kill him/her… but this little face…. 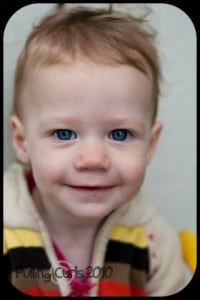 I got her an awesome new truck to ride at my sweet garage sale as our other outside vehicles are pretty well thrashed at this point.  She loves it.  She also loves to wear her brothers helmet.  Does anyone freak out about lice as much as me?  Just sayin’…. 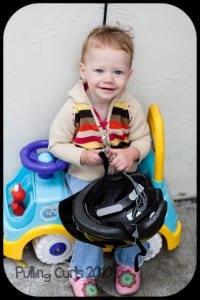 And finally, the ugly one of the batch.  But, I’ve had some clamoring for a picture of my new self and my new clothes.  I got this fine red jacket for like 6 bucks at Savers yesterday.  It does button all the way up but I prefer it this way.  Honestly, looking at the photo I don’t see too much of a difference…. I still see some very chunky thighs.  Jackie Warner, how come those aren’t gone yet?  I do think my face continues to thin on out.  Pretty soon I will no longer have a head, but I will have a lovely pair of thighs. 🙂 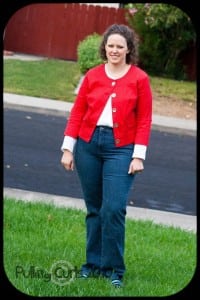 In other news, if I don’t get some sleep I may never lose weight again.  It’s just so hard to function.  This is why new moms get fat.  I can’t. let. that. happen.  I need to stay busy.  That’s my plan.  Hope you have a great plan too for the weekend.  Happy Friday!
Pin
Share
Email
« Previous Post
Newer Post »