Sign Me Up!
You are here: Home / Health / Thriving in the Corona Virus Atmosphere — PCP 034
Health 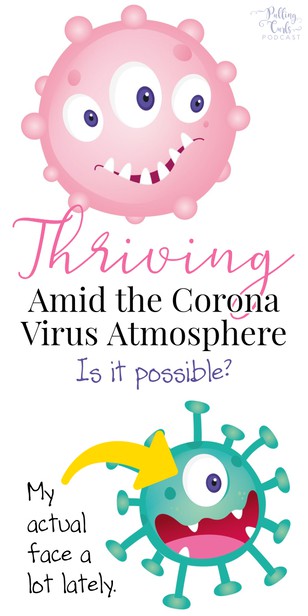 Today we’re talking about taking care of yourself during the Corona Virus (Covid-19) and how to make good choices for yourself and keep the faith.

Grab my schedule to help your family stay in a routine right now:

Hilary Erickson 0:00
Hey guys welcome back to the Pulling Curls Podcast. Today’s episode is gonna be a little different. I have to admit that I had a Disneyland episode planned for today. If I followed my normal schedule (you guys know how much I love a schedule) and I just decided that that didn’t make any sense today. So here we are less than a week before this podcast is supposed to go up and I’m recording a new episode. So today’s episode we’re going to talk a little bit about thriving in the corona virus which doesn’t make any sense because you know, I’m a nurse and it’s clearly Yeah, anyway, thriving in the corona virus let’s untangle it

Welcome to the Pulling Curls Podcast where we untangle everything from pregnancy, parenting, home routines, even some family travel. Because, heavens knows, our lives are tangled I’m your host Hilary Erickson.

Okay guys, so I have kind of joked with friends like asking how we’re doing I’ve had a lot of friends reach out which is so nice because I’m a nurse saying hey, what is it like to be at the hospital and have to say last week, the hospital was fairly normal. Hopefully it stays that way. Right? But I’ve noticed in myself that it’s been really hard for me and I’ve been really caught off guard by that we have food storage. We’ve always had food storage. We have plenty of supplies. You know, this is something that we’ve kind of planned for not really the coronavirus, but like having an emergency is something that we’ve kind of planned and prepared for if you guys don’t know I’m a member of the Church of Jesus Christ of Latter Day Saints in emergency preparedness is one of our top things. In fact, we have a post coming up about it. But it’s a little bit more about like preparing for a fire or stuff like that. So stay tuned for that one. But I think it’s important to acknowledge that this is hard, it is hard to suddenly change your routine. I’m a work at home mom. Most days I’ll be going in the hospital also. But I have my kids home, and my husband home and we’re all home all the time. And that is hard. It’s a huge change in routine. I’ve had things that I was really looking forward to cancelled and my kids have had things that they were looking forward to that they’ve had to cancel and that’s hard. And I think we need to say yep, this is hard. I think it’s important to say that in labor, yes, this is hard. And so when you’re going through hard things, I think it’s great to say yes, this is hard. And also maybe think about why it’s hard. And I mentioned kind of why it was hard for me. But I want you to think about in your own life, why is this been difficult for you? And I think it’s gonna be different for everybody. One of the things I sort of feel guilty about is I’ve always thought, wouldn’t it be great if we were all home with like nothing to do for an extended period of time? And apparently, it wouldn’t be that great. So I sort of feel guilty for the fact that I maybe don’t love every minute of what’s going on at our house. So I don’t know if anybody feels that way. But I thought I would mention it as well. Okay. So we’ve seen all these people at stores going crazy buying toilet paper, and tons of groceries and stuff like that. And I feel like people keep wanting to do something, when in reality, now we’re at a point where we just kind of have to stop. And our mission is to just stand still. And that is really hard in our society we are and it’s really hard for me, maybe it’s not hard for you. But it’s really hard for me to do nothing to kind of have a period of indecision, where we just pause and hold our breath and see what happens. And so for me, that’s been really hard and I’ve noticed that kind of online people keep thinking well, I need to go to the store to get this And maybe you don’t maybe you just need to stay at home and I’ve had that feeling inside myself. Maybe we should go to the store.

So that’s today’s podcast, it’s a little bit different. I hope you guys enjoyed it. I would love it. If you would comment on the post that’s on my blog. This is Episode 34. If you’re looking for podcasts, episodes, but I’d love to know what’s working for you share it on social media tag me I’d love to see it. I love seeing positive things at this time and I hope this has made you feel like you could maybe take some action and really thrive during this time. I really have always wished that our family could be together without distraction and sometimes Yeah, you don’t want what you wish for. So sometimes it’s just so much it’s so much of my family. If I just could have had a few days I think I would have liked it.

So I hope you guys arethriving during the coronavirus. I hope it doesn’t last long. I hope and I’ve been praying I hope if you are a person of faith that you have been praying for it also I really believe that faith and hope can help us come through this unscathed and really, that will be the thing that helps us to thrive. So until next time, I hope you have a tangle free day.