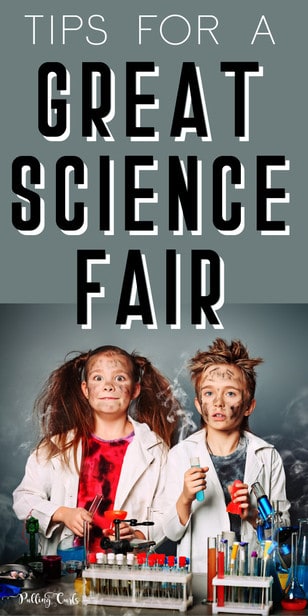 I run our school science fair (after running our Carnival and being PTO president). As parents, we find it important for our kids to have a science fair, so we have made it a priority. I’ve run it the last couple of years and I wanted to share how you might start one at your school. Also, how to help your kid have a rockstar science fair project that helps them learn many things (including responsibility).

Sceience Fairs can come in many forms:

We have done this for a variety of reasons:

As this is the main type of science fair that I have been involved in I will be talking about scientific method projects and fairs.

There are a TON of cool science fair projects out there. I actually have a Pinterest board all about science projects (many are done as a demonstration, but you could add a variable and make it a project within the scientific method).

Personally, we’ve done everything from

How to pick the best science fair project for your kid

My best advice is to find something your kid is already interested in:

Or, take something — a question you’ve had in your house. Which paper towel is the best, does stain remover really work, etc — and test it!

Make sure your kid has a good amount of input into the project. It will really help their interest level.

Here are a few I’ve found to give you some ideas:

I like this one about pencils in a bag of water.

This one is a demonstration, but I like how she takes you through the steps:

It is SO true that you want to let your child do as much as they can, but they will likely need a fair amount of help at this stage. So, support — use their words when you can and help them understand what they learned.

** Remember to do something your child already has interest in — it will help you much in the long run!

Your child is getting older, and go do more on their own. If you have done the project with them for the past few years, start to step away more. Let them brainstorm ideas on their own first.

This is the time to consider being a bit more “scientific” in your research. Do data that allows for numbers (measure the mold vs saying “a lot”)

If your school does an interview do a mock interview with them, so they have a positive experience (they will feel mor pressure to do well than they did in the younger grades).

Now is the time to step away. In 5th grade, kids should be able to do almost 100% of the project themselves (besides driving places to get supplies).

Step away mom, let them do this. They CAN do it!

The most important thing about a Science Project

The MOST important thing about a science project is that it is YOUR CHILD’S PROJECT. NOT YOURS.

That means letters might not be straight, or even look good.

They may make mistakes as they perform the experiment.

The hardest part about science projects (for me) is that they have to be done at home (for the most part) and especially when kids are younger, they do need some help with the project. BUT, the key is not helping too much.

Can I get an amen on that one?

It’s hard not to give your two cents, or chime in. Or frankly, to take it over.

Let your child do ABSOLUTELY EVERYTHING that they CAN do.

Let them ask for your help on the other stuff, and STAY. OUT OF IT.

But, do nag them to make sure they do it — because there are a lot of benefits.

Frankly, this is a skill I’ve had to work on throughout my kid’s lives (even applying to colleges).

Things that should be on a Scientific Method Science Board

First off, we usually get a tri-fold board, it just makes it easier to stand up — but check what works best at your school.

Also, that one I listed is a bit smaller. Unless your child is above 4th or 5th grades I prefer the smaller ones as they will have less to say and will have a very bare looking board if it’s huge.

The biggest part of these things (besides the hypothesis, because making a guess beforehand is also important) — is the variables. One has to say the same, and one has to change.

So, in the hot wheels and the slide, the slide is the constant — and the different cars are the variables

In growing mold, the environment might be the constant (if you used your kitchen counter) and the variable would be the different types of food.

What really matters in a science project?

While it’s really easy to get wrapped up in being right, or wrong — LEARNING something about something you were interested in is the MOST important thing!

Being right or wrong doesn’t really matter, but what you learn and considering changes you could make to make the experiment more perfect. Those are my favorite results, by far!

We REALLY try to stress this with kids, because they want to be right. But learning is more important than being right (what a great thing to learn, right)!

Setting-Up a Science Fair at Your School

Now, I am guessing that most of you don’t want to run a science fair — but in case you do, here are a few steps:

We do an assembly with an engaging teacher who does an experiment. She talks about all the things we’ve talked about so far (especially how LEARNING is the most important thing). We also send a note home with all the kids that day (we also email it to parents) about how the science fair works and how they can participate

As I said before, we don’t devote any school time to the science fair. Children do them at home, and can pick a partner in their grade level (we have allowed some siblings to pair up)

Communicate with Parents about the Science Fair

Email Parents: I email parents a couple of times to elicit questions and to remind them it’s coming up.

We used to give a score, and kids would get different colored ribbons depending on how they scored, but some parents felt this was unfair (big brew-ha-ha) so we just have coments and checkmarks to tell kids how they did.

Getting Volunteers for Science Fair Judging

Get volunteers! You need judges (believe ME — you don’t want to be the one to judge all these projects)! We use a sign-up genius form and we email parents several times asking those who have a scientific background to consider donating a bit of time. Judges can come for as short as they would like in the morning, and we do have a few shifts (and honestly ,we’d take them whenver, as I love to see parents involved at school)

Displaying Boards at the Science Fair

Display boards: you need an area of your school that you are able to use to display the boards. Most teachers also walk their classes through these areas during the coming couple of days that they are up. Also, we ask kids to leave anything breakable, dirty or dangerous at home. We emphasize how much we like great pictures on the board.

Judge! We do an interview with each child. We emphasize to parents that the main goal of the science fair is for kids to feel great when they leave them. That means a lot of positive things and engaging kids in a meaningful way.

Pro tips: We ask that judges try not to judge kids that they know, or at least know well. There is a huge benefit for kids explaining to a stranger about something they learned. It is my ABSOLUTE favorite part of our science fair and there is so much value in this aspect.

Bonus: I believe that our “judging” brings in a lot of parents who don’t normally come into school. I love that a lot, and I encourage that. 🙂

In the afternoon we do a pizza party for the participants. We also give them ribbons on their board for participation (everyone gets the same ribbon).

Honestly, I’ve been involved in our school’s science fair for the past seven years. I love to see what kids learn and how they grow during this process. It’s a great thing. If you’re considering it at your school — DO it!

If you liked this post, sign up for my Practical Parenting series that gives small tips that can make a BIG difference (like, staying out of your kid’s way).