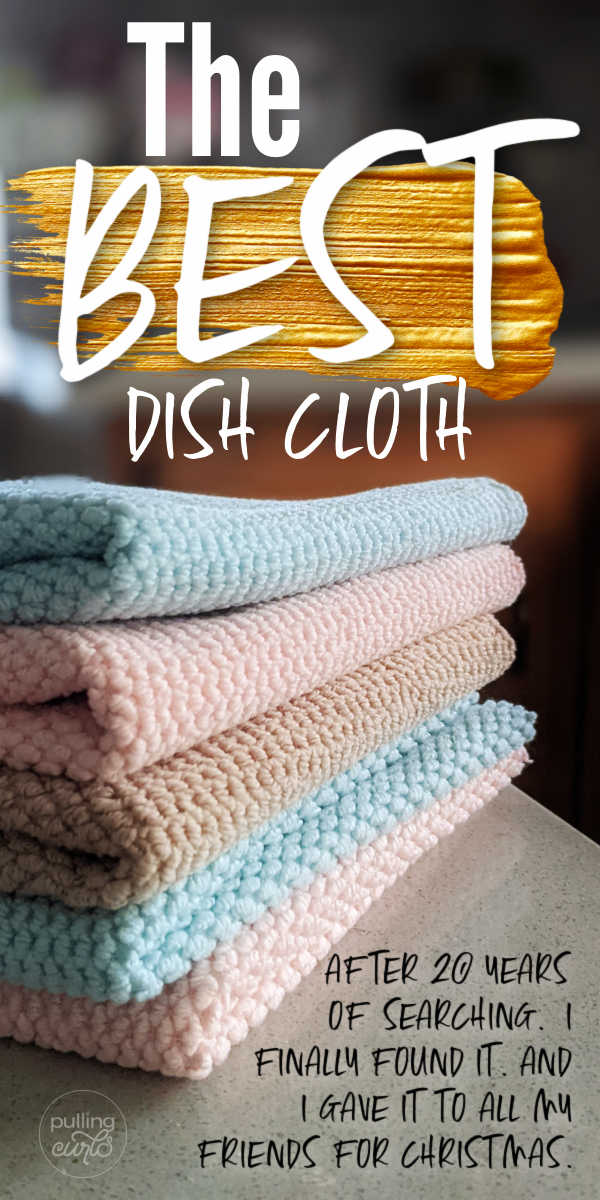 Using the right dish cloth makes doing dishes, wiping counters, and cleaning up spills so much easier, but what is the best kind and where can I get it?

If you’re looking to get organized, join my FREE 5-word Organization Challenge. Just five little words can really make a difference as you make your house more liveable. 🙂

I have searched high and low for a great dish rag. I even took note of what people used in their own home that I liked.

For a long time I used the Ikea burp cloths I had bought my now 11-year-old but as you can imagine they were getting a bit threadbare, and weren’t holding up like they used to.

We were getting set to get new counters (we previous had almond Formica countertops which is a post for itself) — and I knew I wanted new dish cloths to get started on the right foot.

So, I started looking at Amazon. I had previously looked at stores and found mostly terry cloth, or thick microfiber which I knew I wouldn’t love. Here are the things I wanted in a dish cloth:

On Amazon, I again saw a lot of terrycloth dishtowels. Stuff I knew would be similar to what I had. I wanted something different.

I saw some promise in this type of towel. But I also saw that it probably wouldn’t last a real long time. I actually found some similar at Trader Joe’s and I’m just waiting to remember to try them someday.

Ultimately I went with this set. And guys — I’ve bought ne counters, a new dishwasher, a new microwave and a tile backsplash for our kitchen at this point. And while the new dishwasher is one of the loves of my life — these new dishtowels may well be my favorite thing in the kitchen.

**Those go out of stock frequently. This set looks basically the same.

I actually got them for my friends for Christmas and had so many calls of people asking where I got it and how they could get more.

Here’s what I love about this dish cloth:

Cons of this dishcloth:

Ultimately, how EASILY it clean stuff and wring out is a HUGE win for us. Both my husband and myself are both really happy with them. At just over a dollar/towel (although I got them under $1 for Christmas it is a great price).

So, what’s your favorite dish towel? Tell me in the comments!