Sign Me Up!
You are here: Home / Parenting & Family / Swimming Lessons 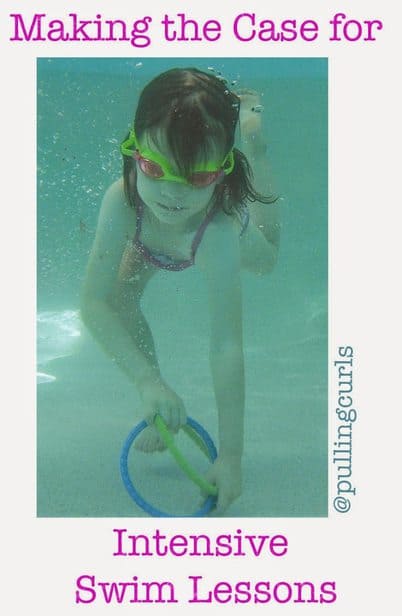 My children are naturally afraid.  It may come from their mom’s every 5th word being “careful” when they’re toddlers… maybe. 🙂  Either way they have all had issues with swimming.  They don’t want to put their faces in the water, they don’t want to have water poured over head in the bath.

Sure, they’re fine to sit on the step and splash, but they don’t naturally want to jump in — which may be a good thing here in the desert where kids pictures are often on the news with sad endings.  There is a pool at about 75% of the houses.

Last summer I had a 4 year old, who — after 2 years of individual swim lessons — was unwilling to put her face in the water and blow bubbles.

Those pictures of dead babies on the news, and stories of CPR on them in my ACLS class weighed heavy on my heart.

I made the drastic decision to do a daily, intensive swim lesson.  I knew there would be crying, but she says by the end they would be able to be dropped in fully clothed (including shoes) and get themselves out. She recommended cutting their nails, putting their hair in a pony tail and maybe mom ear plugs, because it would pull at your heartstrings.

But, not as much as those pictures on the news.

So, we went.  P was so excited.  Our teacher, Ms Parker is truly a dream.  She did a lot of scooping and kicking, and then come the rings.  The first time you see her shove your baby’s head under the water, your heart heads under the water with them.  But, their little face when they come up screaming (hopefully, with a ring) your heart gets a little lighter.  Mrs Parker is FULL of praise, and from day one she has verbal cues. The kids realize that when she says, “Ready, set, and go” they are going under.  They reflexively take a breath. She’s so smart {we actually went to the pool for the first time this summer a couple of weeks ago, and the cues still worked just like a charm!}.

Then, comes the day they drop them in the pool and wait for them to pull themselves out.  There’s a couple of minutes (really, seconds – but it seems like an hour) there when you cheer SO. HARD. for them.  No one is happier to see their little elbow, elbow, belly knee out of the pool.  Praise is HEAPED on them as they scream that they need to go potty and cry for you to get them.

And then there’s the day they push them off the diving board into the waiting waters (with a teacher nearby) and they swim to the other end.

And within 2 weeks I had a swimmer. She knew FULL well that a “big person” needs to be her when she’s around a pool, but I no longer see her face on the news. I attended ACLS (an advanced CPR class for healthcare providers) still worried I would find someone else’s child in  desperate situation, but hopeful that it wouldn’t be mine.

Anyway, I just want to say that I kept thinking that she would get familiar with the pool and naturally just swim.  She wouldn’t. Honestly, I think maybe when she was 8, she would have.  That just didn’t cut it here in the valley of the sun.  My middle one was still having some issues, but after he saw his sister doing a lap he grew-up and is actually doing a LOT better.

So, I put my weight whole heartedly behind intensive life-saving swim classes for toddlers and preschoolers.  They are worth every penny.  For a family on a budget, it wasn’t a instinctive decision for us to spend so much on them.  But, worth it. Totally worth it.

Paige was SO proud when it was all said and done.  She really didn’t think she could do it. But with the encouragement from  good teacher, she did it.  She is thrilled to go back to Mrs Parker again this summer.  She may have forgotten that first she drops her off the edge.  We’re just doing a refresher course this year. But P can do hard things. She’s a big girl. And, she’ll get bigger thanks to swim lessons.